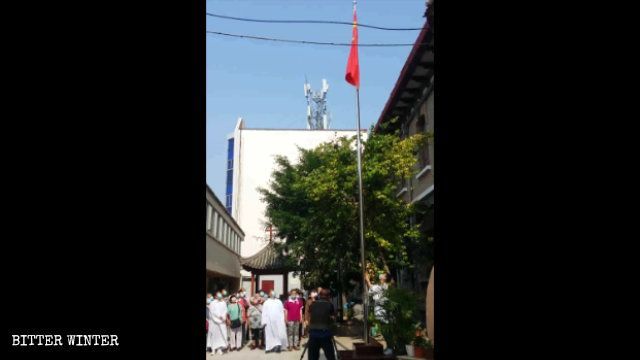 Some state-run churches were allowed to reopen in China after a 5-month lockdown. But only after proving their loyalty to the Communist Party.

The Lishiting Catholic Church in the Shunhe district of Kaifeng, a prefecture-level city in the central province of Henan, reopened on June 14, after staying closed for five months. “We solemnly raise the national flag here today after the epidemic, witnessing the fruits of all people working together under the leadership of Xi Jinping who directs the government and the Party,” a priest told a gathering of about 20 people, supervised by government officials.

The Gangxi Christian Church in the district was also reopened at 8 o’clock that same morning. “The church finally reopened after five months, 147 days, or 21 Sundays, but instead of singing hymns to praise God, the government required us to raise the national flag and sing the national anthem, praising Xi Jinping’s ‘victory in fighting the epidemic,’” a congregation member commented. “This is completely contrary to our belief.”

Some state-run places of worship were allowed to reopen in June, long after other public venues in China returned to normal after coronavirus restrictions have been lifted. But only those who commit to endorsing patriotism are permitted to open their doors to congregations. The Two Chinese Christian Councils in Henan, Zhejiang, and other provinces demanded that on the relaunch day, churches must promote patriotism, raise the national flag, sing the country’s anthem, and tell believers “moving stories about China’s battle with the pandemic.”

At 7 a.m. on June 13, over 20 clergy members of the Quannan Church, the largest Christian church in Quanzhou city in the southeastern province of Fujian, held a flag-raising ceremony in its courtyard. An eye-catching slogan promoting the core socialist values was posted on the wall behind the flagpole.

That day, under the supervision of officials from the city’s United Front Work Department and Religious Affairs Bureau, the church pastor praised President Xi Jinping’s achievements in fighting the epidemic. “We should love the socialist system and the Communist Party,” he said, going on to promote the “superiority of the socialist system” and criticizing the United States for its efforts battling the pandemic.

“The United Front Work Department and Religious Affairs Bureau demand to hold flag-raising ceremonies and promote patriotism,” a church member commented. “From now on, all churches have to do so, or they will be shut down, and their leaders dismissed.”

A preacher from Henan’s Zhumadian city told Bitter Winter that before his church reopened, he had to attend a conference organized by the local Two Chinese Christian Councils. Participants had to study Xi Jinping’s major speeches on preventing and controlling the coronavirus outbreak and listen to “heroic stories of fighting the epidemic.”

“The government demands to promote these things to congregations after churches reopen,” the preacher explained. “These texts are published in a booklet, over 100 pages long. Preachers must mainly talk about the state’s policies. Those who disobey will be arrested.”

A pastor of the Seventh-day Adventist Church thinks that the requirement to raise the national flag and promote patriotism on the day churches reopen is aimed at “disturbing the minds of believers to transform their ideologies and change the essence of their beliefs.” He is concerned that the CCP will further intensify its control over people of faith through patriotic education and indoctrination. “Its ultimate goal is to make all people believe in communism only, to ‘sinicize’ Christianity,” the pastor added, calling on believers to “stand guard against the CCP’s vicious intentions, not to become prisoners of communism.” “Three-Self churches should follow the path of house churches and hold meetings in secret, to avoid being controlled by the CCP and save their pure faith,” the pastor concluded.