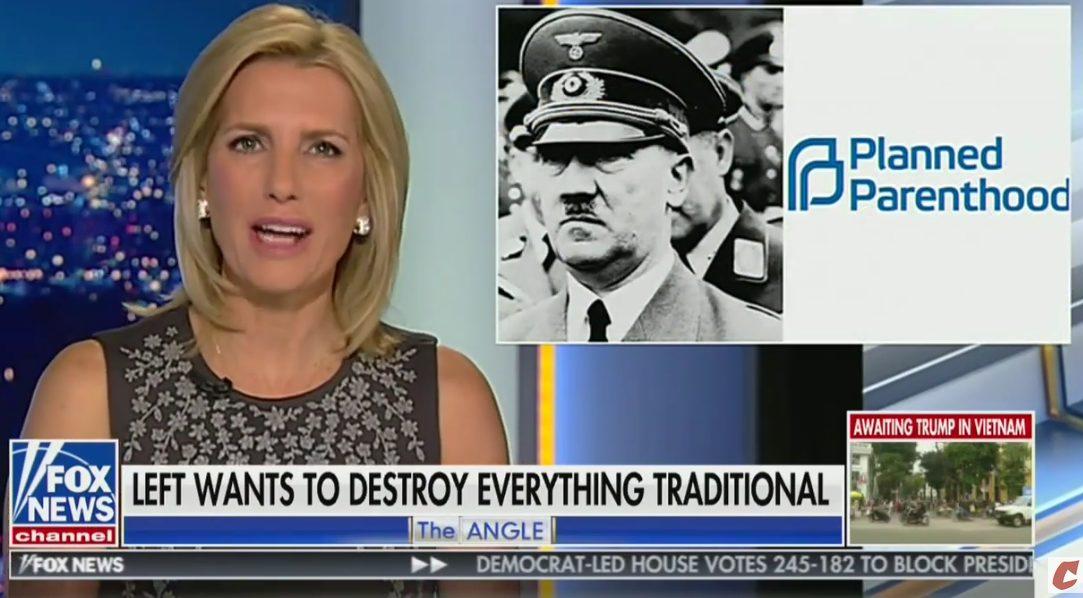 In a fiery video, Fox News commentator Laura Ingraham called out the Democratic Party for its barbaric acceptance of abortion, likening it to Hitler’s actions during the Holocaust.

Ingraham responded to House and Senate Democrats blocking a bill that would protect children who survive abortions in her segment on “The Ingraham Angle” on Tuesday.

“A family usually requires a child, and infanticide usually requires the taking of a child’s life, doesn’t it? And what [pro-abortion U.S. Sen. Patty] Murray didn’t mention is that she and her party’s opposition to this common-sense bill is itself anti-science. We have a viable child that has been born. In what way is it anti-woman or anti-family to protect the life of that child? It’s craziness,” Ingraham said.

Ingraham continued, mentioning how voicing opinions counter to the pro-abortion narrative leads to social exclusion. “You deviate from what the social justice warriors stipulate today, and they’ll decapitate you in the workplace and in school if they have their way,” she said.

“These people are fanatics. They’re zealots, hell-bent on a complete upending of the social order and the upending of just about everything that embodies or even comes close to embodying tradition.”

Ingraham brought up an interview that pro-abortion feminist icon Gloria Steinem appeared in earlier this week. Steinem had been promoting a book of hers, which contains an essay likening Republicans and the pro-life movement to Nazism.

“I’m afraid Gloria is getting a bit dotty in her old age. She essentially is arguing that in order to save humanity, you have to kill off more humans,” Ingraham commented.  “Hitler, just like Planned Parenthood, practiced and defended mass extermination, all in the name of racial purity, which is exactly what the founder of Planned Parenthood believed.”

“[Sanger] said, ‘We want a world freer, happier, cleaner. We want a race of thoroughbreds.’ It shouldn’t surprise you that Sanger established her first full-service clinic in Harlem in 1930…why Harlem? Well, as the Washington Times explains, that’s where a lot of the black people — she often referred to as ‘human weeds’ — lived. Sanger described it as an experimental clinic established for the benefit of colored people. Well, from her, the word benefit really just meant ‘elimination,’” Ingraham said.

Despite these grisly truths, she noted that there is still hope for the pro-life movement. She shared a new poll about how pro-life Democrats are on the rise. “Americans are overwhelmingly believing that third-trimester abortions should be outlawed – 71 to 25 percent,” she noted. ← Prev: For 16 Syrian Believers, Baptism Is a Radical Choice Next: House Democrats Block Request to Vote on Bill to Stop Infanticide For 9th Time →