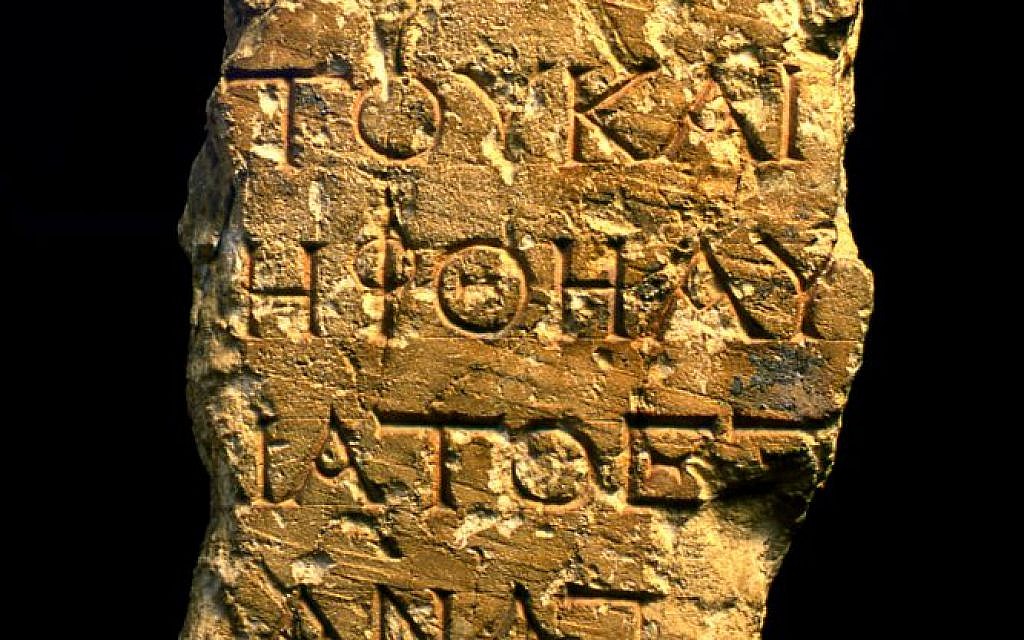 This warning sign would have been located somewhere on or near a wall that prohibited Gentiles from going beyond a specified point in the temple complex. Only Jews were permitted beyond this wall.

The apostle Paul refers to this middle wall of partition as being broken down in Ephesians chapter two. Where Paul writes that prior (the previous 2000 years since Abraham around 2000 BC) to this middle wall of partition being broken down the Gentile world had no access to Israel’s God. And were without hope. Only after (NOT BEFORE) the finished work of the cross, the shed blood of Christ, His death, burial, and resurrection 3 days later do Gentiles have access to Israel’s God and salvation apart from the Mosaic Law and Temple worship.

‘Wherefore remember, that ye being in time past Gentiles in the flesh, who are called Uncircumcision by that which is called the Circumcision in the flesh made by hands; that at that time ye were without Christ, being aliens from the commonwealth of Israel, and strangers from the covenants of promise, having no hope, and without God in the world:’

‘but now (not before cross) in Christ Jesus ye who sometimes were far off are made nigh by the blood of Christ. For he is our peace, who hath made both one, and hath broken down the middle wall of partition between us; having abolished in his flesh the enmity, even the law of commandments contained in ordinances; for to make in Himself of twain one new man, so making peace; and that he might reconcile both unto God in one body by the cross, having slain the enmity thereby:’

The bottom line is that Jesus Christ was the minister of the circumcision, the Jews (Romans 15:8). To fulfill the promises He Himself made to the people He created for Himself through Abraham, Isaac, and Jacob. The promise that one day Israel would have a King and a kingdom in a geographical area of land. Israel would be the preeminent nation above all nations. With the Son of God as their King, ruling from David’s throne in Jerusalem. But Israel rejected their Messiah and, along with the Romans (the Gentile world), crucified Jesus Christ. Because of Israel’s unbelief, God has temporarily blinded the nation of Israel and for the last 1900+ years has been pouring out His grace on ALL mankind with the gospel of the grace of God. Preached by the apostle of the Gentiles, Paul. That salvation is by faith alone in the death, burial, and resurrection of Christ alone apart from the Mosaic law and temple worship.

The unassuming slab of limestone doesn’t look like much. It’s crudely fractured and chipped on the sides, pockmarked with age, and is perched not too prominently on a shelf at the Israel Museum. But its smoothly hewn face and crisply etched Greek letters, still bearing faint traces of red paint, belie monumental significance.

“If we talk about the closest thing to the Temple we have,” said David Mevorach, senior curator of Hellenistic, Roman, and Byzantine Archaeology, “on the Temple Mount, this was closest.”

Two millennia ago, the block served as one of several Do Not Enter signs in the Second Temple in Jerusalem, delineating a section of the 37-acre complex which was off-limits for the ritually impure — Jews and non-Jews alike. Written in Greek (no Latin versions have survived), they warned: “No foreigner may enter within the balustrade around the sanctuary and the enclosure. Whoever is caught, on himself shall he put blame for the death which will ensue.”

There are actually two extant copies of the warning notices — a partial one here in Jerusalem at the Israel Museum, and a second, complete, in the Istanbul Archaeology Museum — and they are among a small handful of artifacts conclusively belonging to the shrine built by Herod toward the end of the first century CE. Contemporary accounts mentioned their existence, and 1,800 years after the Temple’s destruction, a French archaeologist found a complete copy that had been incorporated into the wall of a Muslim school in Jerusalem’s Old City.

“It is remarkable that this stone that… comes from the ancient Jewish Temple hasn’t been carried away far from from its original location,” Charles Simon Clermont-Ganneau wrote about his 1871 discovery. “Indeed, the place where I found it is only 50 meters away from the Haram al Sharif, the sanctuary of the Jews.” […]

Click here to view the source of this article www.timesofisrael.com

← Prev: A Kingdom For Israel: The Clear Intent Of Prophecy That Most Pastors Dismiss Next: The United States Digital Dollar is a Giant Step Closer to One World Currency and the "Beast System" →