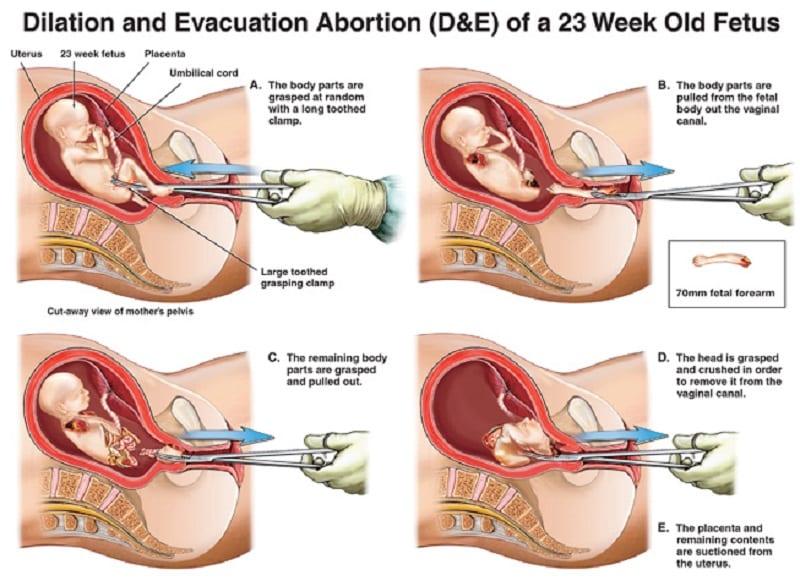 Indiana House lawmakers moved forward Thursday with a bill to ban one of the most brutal abortion methods in their state. The lower chamber of the Indiana legislature voted to advance state House Bill 1211 to ban dismemberment abortions.

The House passed the bill by a landslide margin 71-25 with the support of most all Republicans and five Democrats and it now heads to the state Senate for consideration.

Sponsored by state Rep. Peggy Mayfield, the bill would allow abortionists to be charged with a felony if they abort an unborn baby by tearing the baby limb from limb while their heart is beating. These types of abortion procedures are common in the second trimester when unborn babies are nearly fully formed and it was used to kill 27 babies in 2017.

“Like the Partial-Birth Abortion Ban, this legislation aims to prohibit an inhumane practice that brutalizes the body of an unborn child,” according to Indiana Right to Life.

“This legislation would prohibit dilation and evacuation abortions, a procedure in which the abortionist first dilates the woman’s cervix and then uses steel instruments to dismember and extract the baby from the uterus. The D&E abortion procedure is usually performed between thirteen and twenty-four weeks LMP. Sadly, these are happening in Indiana,” the group continued.

“Today’s historic vote brings us one step closer to ending barbaric dismemberment abortions in Indiana,” added Indiana Right to Life President and CEO Mike Fichter. “We look forward to the Senate taking equally decisive action in the weeks ahead.”

Several other states already have passed laws to protect unborn babies from being ripped apart in their mothers’ wombs. Alabama and Kentucky are in legal battles with the abortion industry to defend their laws.

Dismemberment abortion is a procedure in which the abortionist first dilates the woman’s cervix and then uses steel instruments to dismember and extract the baby from the uterus. The procedure is usually performed between 11 and 24 weeks LMP, when the baby is somewhere between the size of a lemon and a cantaloupe.

By 11 weeks, unborn babies already have fingers and toes, heartbeats and detectable brain waves. They can respond to touch, yawn, suck their thumbs and even show signs of being right or left handed.

The Dismemberment Abortion Ban is built in part on the U.S. Supreme Court precedent set in Gonzales v. Carhart (2007), which upheld the federal Partial-Birth Abortion Ban and scaled back the scope of Roe v. Wade. In its opinion, former Justice Anthony Kennedy, a swing vote on abortion, described what occurs in a D&E abortion: “[F]riction causes the fetus to tear apart. For example, a leg might be ripped off the fetus… No one would dispute that for many, D&E is a procedure itself laden with the power to devalue human life.”

← Prev: Virginia Legislature Defeats ERA That Would Force Residents to Fund Abortions Next: Illinois Bill Would Legalize Abortions for Any Reason Up to Birth, Force Christians to Fund Them →