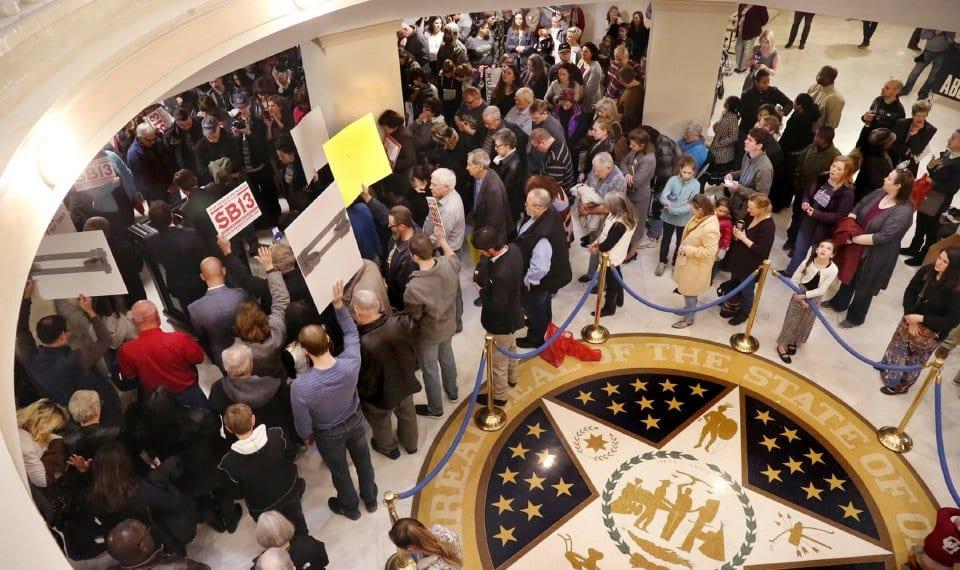 Hundreds of pro-life advocates gathered Tuesday at the Oklahoma Capitol to urge lawmakers to protect unborn babies by banning all abortions.

NewsOK estimated at least 400 pro-life advocates showed up at the rally in support of state Senate Bill 13.

The controversial bill would prohibit the killing of unborn babies without exception and amend the definition of homicide in the state criminal code to include all abortions. It appears that both abortionists and mothers could face criminal charges for aborting an unborn baby under the legislation. State Sen. Joseph Silk, R-Broken Bow, is the lead sponsor.

“They don’t have anybody to protect them,” Carney said. “Their mothers should be the ones protecting them and they’re not. They’re killing them.”

Pastor Dan Fisher, a former state representative, spoke at the rally with Silk and other lawmakers.

However, Fisher admitted he is not optimistic about the U.S. Supreme Court overturning Roe v. Wade after it blocked a Louisiana abortion regulation earlier this month. Many pro-lifers expressed deep disappointment at Chief Justice John Roberts, who sided with the liberal justices in the case.

But Fisher, who finished fourth in last year’s Republican primary and ran his campaign on a platform of abolishing abortion, told Tuesday’s crowd he believed Oklahoma lawmakers should outlaw abortion without giving the Supreme Court consideration.

“When did the Supreme Court become the final arbitrator on what is right and what is moral?” Fisher asked the crowd.

Even some pro-life advocates may not fully support Silk’s bill. While pro-lifers long for the days when every human life is protected under the law, historically, the pro-life movement has opposed punishing mothers who have abortions.

Even if the bill does pass, it almost certainly would be struck down in court. When courts rule against such laws, state taxpayers often are forced to reimburse pro-abortion groups for their legal fees.

When considering a similar Missouri statute in 1989, U.S. Supreme Court Chief Justice William Rehnquist ruled that the personhood statute was nothing more than a statement of position that had no bearing on banning abortions or even limiting them in any way.

Missouri had approved a statute saying, “the life of each human being begins at conception” and “unborn children have protectable interests in life, health, and well-being.” The statute required that all state laws be interpreted to provide unborn children with rights equal to those enjoyed by other persons.

The U.S. District Court for the Western District of Missouri struck down that provision and the abortion limits. The U.S. Court of Appeals for the Eighth Circuit affirmed the decision.

The U.S. Supreme Court then ruled that it did not need to consider the constitutionality of the law’s preamble, defining personhood at conception, as it could not be used to support any abortion laws that conflicted with Roe v. Wade. Rehnquist wrote the decision. Ultimately, the Supreme Court upheld the personhood language Missouri used decades ago but did not allow it to ban — or even limit — any abortions.