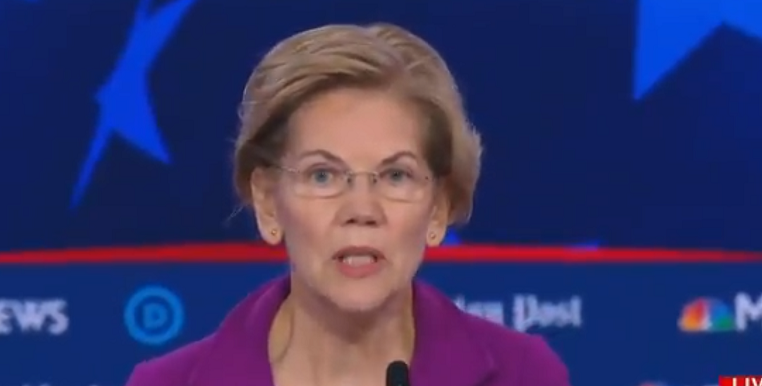 Elizabeth Warren insisted that aborting unborn babies is a “human right” Wednesday during the Democratic presidential debate in Georgia.

Warren, a Massachusetts senator and one of the top candidates in the polls, did not include any qualifiers or exceptions when she said that abortion should be treated as a human right. Her voting record and past statements show that she supports abortions for any reason up to birth. In February, she even voted against a bill to protect newborn babies from infanticide if they survive abortions. On the debate stage Wednesday, MSNBC moderator Rachel Maddow asked Warren about the heartbeat law in Georgia that prohibits abortions after an unborn baby’s heartbeat is detectable, about six weeks of pregnancy, Rome News-Tribune reports. A federal judge recently blocked the law from going into effect.

“Abortion right are human rights,” Warren responded. “If abortion is made illegal, rich women will still get abortions.”

Later, she added: “I want to be an America where everyone has a chance. A woman should be able to call on her mother, her partner, her priest, her rabbi, but the one entity that should not be in the middle of that decision is the government.”

← Prev: Christian Persecution: Montana School Under Fire for Telling Christian Club to Change Its Beliefs on Marriage Next: Amy Klobuchar Falsely Claims Americans Support Abortion, But 60% of Americans are Pro-Life →