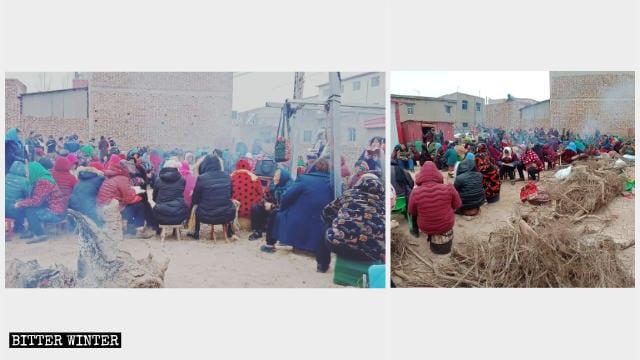 Considering China’s ongoing anti-religion campaign, it comes as no surprise that it’s refusing to approve applications to build and refurbish existing religious venues. After all, it goes against its repeated destruction and demolition of holy sites. As a result, Christians are resorting to meeting in buildings that have fallen into disrepair.

But now the Chinese authorities are coming for those buildings, too. And believers who hold their gatherings in a dilapidated building are finding themselves in dire circumstances – like those at Chenqiao Church in Zhongmou county, under the jurisdiction of Zhengzhou city in the central province of Henan.

Due to the old age of Chenqiao’s Three-Self church, Pastor Mr. Chen and fellow believers were planning to invest more than 600,000 RMB (about $89,000) to rebuild the church on its original site. In early March 2018, Mr. Chen and believers started the demolition and reconstruction work, but they were soon obstructed by the township’s Religious Affairs Office and police station. Officials claimed they must obtain approval from the county’s Religious Affairs Bureau to rebuild the church.

The proclamation from the head of the county’s “Two Christian Councils” – the China Christian Council and the Three-Self Patriotic Movement – was that religious belief is restricted by state policies and churches aren’t allowed to rebuild, even if they apply for a permit.

During this period, believers went to the county’s Bureau of Letters and Visits to report the situation, and request permission from the government to tear down the dilapidated building and rebuild the church. However, their efforts were to no avail; the reconstruction work continued to be obstructed by the township government. Believers had no choice but to hold their gatherings outdoors.

In late October, with the weather getting colder, Mr. Chen and believers used makeshift materials to build a temporary building with five rooms for their gatherings. But the township government and police station kept a close eye on them and demanded that they make fire-control improvements on the grounds that a fire hazard existed and ordered Mr. Chen to demolish the makeshift building within three days.

Bitter Winter has repeatedly reported on similar cases. Catholic, Christian and even Buddhist venues have all encountered the same predicament.

Jinquan Pavilion is a Buddhist temple located in Xianyou county under the jurisdiction of Putian city in China’s southeast Fujian Province. Having fallen into disrepair over the years, the wood beams became damaged and rotten, and leaking occurred whenever it rained. In November 2018, the temple’s head submitted a reconstruction application to the local village committee, and it was approved. While construction was underway, more than a dozen personnel from the local Land Management Bureau came and aggressively smashed things everywhere, and threatened to break the vehicle if the driver did not pour out the cement. Having been obstructed by the authorities, the reconstruction of the temple was forced to stop.

Afterward, the temple’s head submitted an application to rebuild the temple, but various government departments passed the buck back and forth and didn’t approve it.


Believer Dies While Running From CCP

After five years of persecution, a member of The Church of Almighty God fell s…

Under CCP Persecution, Chinese Citizen Escapes Death
Sun Juchang and his wife, Jiang Shuhong, together have spent a cumulative 1,382 …