Evil: Black Lives Matter Protesters Beat Catholics while they were Praying Around a Statue 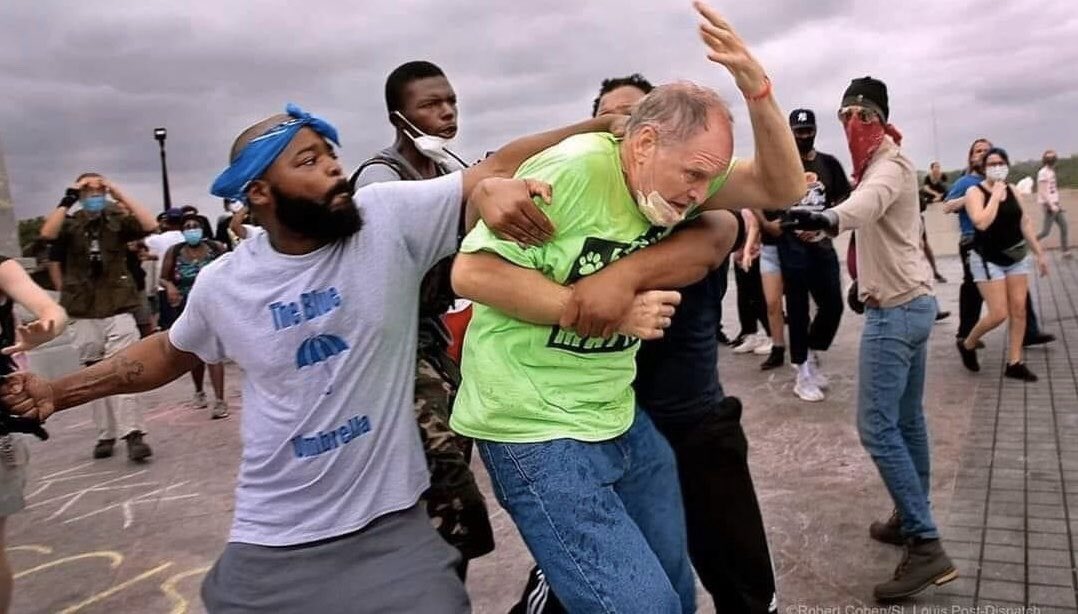 Connor is a writer for The Libertarian Republic. Connor’s full statement on Facebook read: “Yesterday, while praying for peace and unity in our city and the protection of the Saint Louis statue, Black Lives Matter protesters started to harass, berate, and assault the Catholics that were peacefully praying. We did nothing in retaliation. We allowed them to spit on us, call us names, put their fingers in our faces, push us, and antagonize, but we did not retaliate. We continued to peacefully pray. One male then came over and said he would attack me, one other Catholic man, and a Catholic woman that was there if we did not leave. We continued to pray.

At that moment someone in the crowd poured an unidentified liquid on the older man pictured below in the comments protecting his head, and was then attacked by a violent individual, also pictured below with his arm pulled back about to attack the elderly man. We got the elderly man out of there safely, and I was about to leave to retrieve my lunch as a friend of mine had just come over to tell me my food had arrived, when the mob approached him. They asked if he was with me, and when he said yes they began to berate him. They took his walking stick from him and when he didn’t react they knocked his hat off of his head, called him a skin head, and attacked […]

Yesterday, while praying for peace and unity in our city and the protection of the Saint Louis statue, Black Lives Matter protesters started to harass, berate, and assault the Catholics that were peacefully praying. We did nothing in retaliation

At that moment someone in the crowd poured an unidentified liquid on the older man, pictured below protecting his head, and was then attacked by a violent individual, also pictured below attacking the elderly man.

Click here to view the original web page at thelibertarianrepublic.com

It’s an established historical fact that Marxism and communism are evil with a track record of death and despair for the people living under communism.

The founders of Black Lives Matter are professed trained Marxists. Just a cursory read of black lives matter website and death to America, lawlessness, gross immorality, jumps off the page as their gospel. You would think anyone in America, the land of liberty and freedom, would tell anyone associated with a Marxist/communist organization to take that evil back to China.