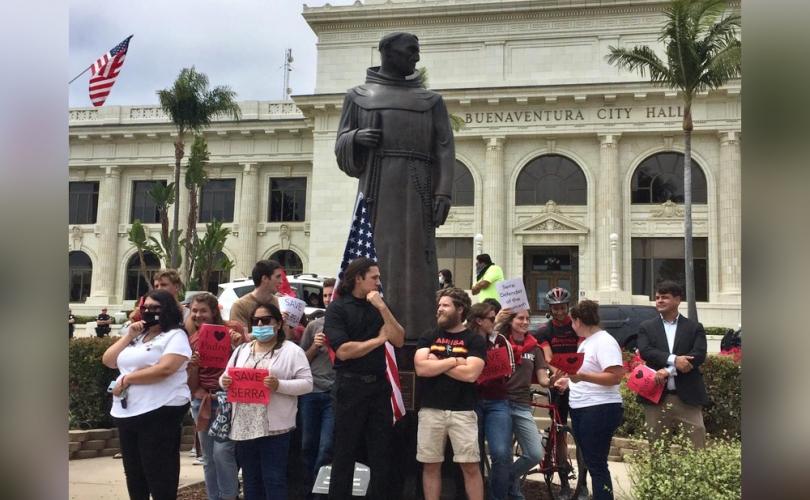 VENTURA, California, June 25, 2020 ( LifeSiteNews ) – A group of courageous young Catholics surrounded the statue of a saint in Ventura, California last Saturday, placing their bodies in between Junipero Serra and the mob who wanted to tear him down.

The anti-Serra demonstrators had put out a call on social media for the June 20 event that began at 1 PM. Calling the event “Tear down Junipero Serra,” the demonstrators stated that “No longer shall we celebrate the enslavement, rape, and genocide of the original people of Ventura.” The anti-Serra social media announcement about the June 20, 1 PM demonstration in Ventura, California. That same weekend, statues of Catholic saint Serra, considered the founder of the California missions, were toppled and defaced in San Francisco’s Golden Gate Park and historic Olvera Street in Los Angeles. Serra, a Spanish Franciscan missionary to the United States, helped to found nine missions in California in the late eighteenth century.

He established the mission of San Buenaventura in 1782, which is now present-day Ventura. His statue was erected at city hall in 1936. The current bronze statue was erected in 1989. Pope Francis canonized him in 2015. At 1 PM, anti-Serra demonstrators, about 200, gathered near the statue of the saint, located in front of Ventura’s city hall, where they began a rowdy demonstration. Rally speakers addressed a diverse and vocal crowd whose slogans included “Black Lives Matter” and who held signs reading “He Ain’t No Saint” and “Father Genocide.” Some speakers, like local Chumash elder Julie Tumamait-Stenslie, appealed for a peaceful and ordered removal of the statue, while others tried to rally the crowd to pull the statue down immediately, with repeating chants of “Tear it down! […]

← Prev: Diminished Joe Biden says he would sign order forcing Americans to wear masks Next: A trans Christian minister came out in a sermon. Now, she’s bracing for what comes next. →