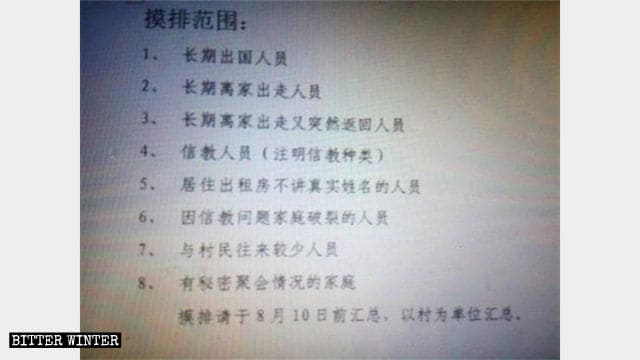 As Chinese promote a Mao-era policy that pits people against each other, they’re also increasing the militancy in each and every village.

The Chinese Communist Party (CCP) is working on an extensive new policy, the “One Village, One Police,”  to go hand-in-hand with its expansion of the Fengqiao Experience – a kind of “stability maintenance” method that encourages people to report on each other. The new policy would increase the presence of authorities in villages across China. And the edict to hunt down religious believers has already been sent down.

Mr. Xiao (pseudonym), who calls himself “a village police officer,” from Central China’s Henan Province, provided Bitter Winter with a picture of a notice he received last August from his local police station, demanding that village police investigate and identify all villagers who hold religious beliefs.

But for the record: Mr. Xiao isn’t a regular police officer – he’s part of the reserve police force. In 2019, these police-affairs or auxiliary officers, who penetrate deep into the countryside, will be deployed extensively nationwide as part of the efforts to promote the Fengqiao Experience, which encourages people to attack each other as a means of suppressing religion.

The notice provided by Mr. Xiao hasn’t been affixed with an official seal, so it’s hard to tell which bureaucracy sent it out. But it does state clearly who the village police are supposed to be looking for: People who have traveled abroad for an extended period of time and those who have left their homes for a while; religious people; those living in rented apartments that don’t reveal their real names; families involved in secret religious gatherings, etc.

“Those people who do not return home for a long period of time might be believers who are hiding to avoid arrest or are spreading the gospel away from home. It is also possible that they have already fled overseas. Therefore, they must be the focus of investigation,” Mr. Xiao said. “Those people who are unwilling to tell their real names could also be believers on the run; therefore, such information must be promptly reported.”

He added that investigating religious believers in the village was one of the focuses of his work in 2018.

According to a report released on January 7, found on the Public Security Department of Henan Province’s website, Guo Shengkun, a member of Politburo committee and Secretary of the Central Political and Legal Affairs Commission of the CCP, pointed out in December that “One Village, One Police” is the embodiment and carrier of a new era of the Fengqiao Experience, and that its implementation will be extended from rural to urban and community governance.

As Bitter Winter has previously reported, through the expansion of Fengqiao Experience, the Chinese government relies on mobilizing the masses to monitor and report on each other, like employing garbagemen and landlords to spy on believers or mobilizing “red armbands vigilantes to “maintain public order.”

The “One Village, One Police” policy ties directly into it.

It’s also sometimes referred to as the “One Grid, One Police” policy, which is the CCP’s new system of breaking up village neighborhoods into 15-20 households per square and giving each grid its own dedicated administrator. That way, the CCP can tighten its watchful grasp on citizens.

A police officer who is assigned to cover a village can be allocated several auxiliary police officers, establish a “police affairs point of contact,” form a “mass-prevention and mass-governance patrol team” and appoint other information officers. Their task is to cooperate with police officers in information collection, patrolling and monitoring, government policy propaganda and other work.

As one of these auxiliary police officers, Mr. Xiao told Bitter Winter that the government issues a special uniform and dedicated communication tools to each of them. His primary responsibility is to patrol the village. He has the authority to question, and even search, strangers or vehicles entering the village. Upon discovering suspicious people, he can take photos of them and use special equipment to transmit them to a database inside the public security system.

“Some of the village police officers are village committee members who hold the two jobs concurrently; many of the others are local ruffians or people with bad reputations, who would do anything to earn money and aren’t afraid of offending people. In general, they are people who are relatively familiar with the village’s situation,” he said.

Some villages in Anhui Province are also recruiting auxiliary police officers. The government issues them electric police scooters and special clothing, and they patrol the entire village.

“Most of these ‘village police officers’ are ruffians in our village,” one Christian said. “Under the pretext of checking household registration, they go to the homes of many Christians to investigate and ask about their family. They take photos and make video recordings of some Christians. Sometimes, they even follow us.”

Recently, Mr. Xiao’s main task has been to specifically target villagers who attend The Church of Almighty God (CAG); village police in seven nearby villages have already reported the information about believers in Almighty God in their assigned grids.

“Our task is to ascertain these people’s information, so that we have a full grasp of their family members, family situation, mobile phone numbers, whereabouts, bank deposits, and so on. This information is to be put online and shared provincewide,” Mr. Xiao explained. “The government also arranges for us to learn about the CAG. There are also competitions, assessments, and rewards for village police officers who have reported the most CAG believers.”

And, ironically, some Three-Self churches have also been converted into police affairs offices. A Three-Self church in Anyang city’s Muchangtun village is one. It has a sign that reads: “One Village One Police Muchangtun Village Police Affairs Workstation.”

The increasing control over the countryside by the Chinese authorities is evident: From the issuance of the No. 1 Central Document in 2018, entitled Opinions on the Implementation of the Strategy of Rural Vitalization, which requires restriction on religions in rural areas, to the Sharp Eyes Project which has a litany of surveillance cameras installed in rural areas, to the current “One Village, One Police” system.


Pastor Wang’s Parents and Son Under Surveillance
Since his arrest in December, the pastor’s mother has been beaten, the whole fam…