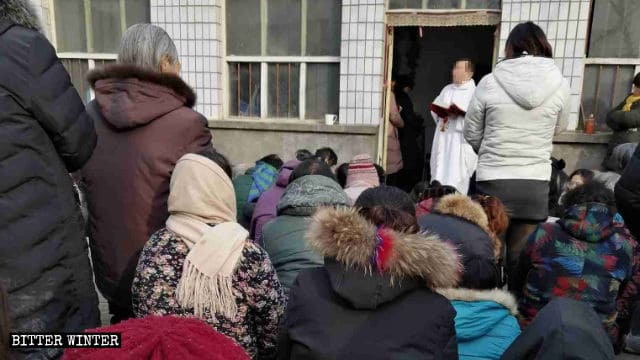 The Chinese government continues to vilify underground Catholics and house church Protestants, but believers adhere to their faiths in the face of persecution.

Since the implementation of the new Regulations on Religious Affairs last February, multiple house churches (such as Beijing’s Zion Church, Chengdu’s Early Rain Covenant Church, and Guangzhou’s Bible Reformed Church) have been persecuted and shut down for refusing to register with the government-controlled Three-Self Church.

The predicament of the Underground Catholic Church has worsened even more after the signing of the Vatican-China deal of 2018, which the Chinese authorities interpret as a means to pressure resistant churches to join the Chinese Patriotic Catholic Association. As a result, underground priests are being monitored, summoned for questioning, imprisoned or put under house arrest.

So, it comes as no surprise that an underground Catholic church in Xingtai city in northern China’s Hebei Province was ordered to shut down in October 2018, on the grounds that it “did not have a religious venue registration certificate.” Before the closure, the local government regularly sent personnel to conduct inspections and maintain close surveillance of the church. As a result of such relentless investigations, church members have started notifying congregants of the time and location of Sunday Mass at the latest possible moment.

In early December, in the dead of winter, congregation members attended Mass outdoors in a remote, cramped courtyard. Braving the cold wind, the priest stood by the door reading scripture and delivering a sermon. Church members shivered with cold and had to stomp their feet to keep warm. Seniors and children huddled together for warmth.

On Christmas Eve, the priest and members of the congregation took a risk and secretly returned to their church to hold Mass, but they did not dare to turn on the lights at the entrance and in the courtyard. Afraid of being caught, on Christmas day, believers moved to another secluded courtyard, where they continued their worship outdoors.

“Under persecution by the government, one must have a resolute mind and maintain the faith,” one long-time church member said.

Over in Tongcheng city in eastern China’s Anhui Province, on September 9, 2018, house church believers were in a gathering at a meeting venue built on the property of one of the church members, when government personnel suddenly stormed in, claimed that the meeting place was against the law, and warned the owner that her house would be torn down if further gatherings were held.

Government officials ordered an electrician to cut off the electric wiring to the owner’s home, then police locked the door to her courtyard, took away the key and effectively shut down the meeting venue.

On December 7, Tongcheng city received its first snowfall of the winter. More than 100 members of the congregation, not having a place to worship, covertly gathered on a local river dam for a prayer at about six o’clock in the morning.

More than 100 believers gather on a local river dam:


On November 25, 2018, a meeting venue of the Local Church in Ningde city in southeast China’s Fujian Province was also raided by the police. That day, two police officers suddenly stormed into the meeting venue, registered the personal information and home addresses of each of more than 30 believers who were present and took photographs of them.

“If the state doesn’t recognize it, it’s a xie jiao. You have to go to a state-approved Three-Self church for your gatherings,” one police officer said.

Despite being persecuted by the police, the believers didn’t cave and continued to hold their gatherings – they just have to change their meeting times frequently.

This community belongs to a group of churches which has a complicated history. According to one of the church’s elderly believers, the church has refused to join the Three-Self Church for 30 years and, has been subjected to long-term persecution by the authorities. In 1986, all of the church’s believers, more than 60 in total, were arrested by the police while attending a gathering. From 1990 to 1995, the church’s leader was arrested four times and was detained and subjected to mandatory indoctrination; in 1997, this church leader was sentenced to two years in prison just for his belief.

“Now, all the ‘above-ground’ churches [referring to churches under Chinese Catholic Patriotic Association] have erected the national flag. The Constitution, the Core Socialist Values and China’s traditional culture have all entered these churches,” one underground Catholic priest said. “Portraits of Mao Zedong and Xi Jinping have even been hung inside churches for believers to worship. This defiles the temple of God with filthy things. We would rather hide from place to place and read scripture and hold Mass in shabby huts under tough conditions than join the Chinese Patriotic Catholic Association.”

Reported by Yang Xiangwen and An Xin


Religious Persecution at Universities Rises
Shaanxi University of Science and Technology.
In China, universities are regar…

Continued Suppression of Underground Catholic Church
Despite an agreement between the Vatican and Beijing, Chinese authorities contin…