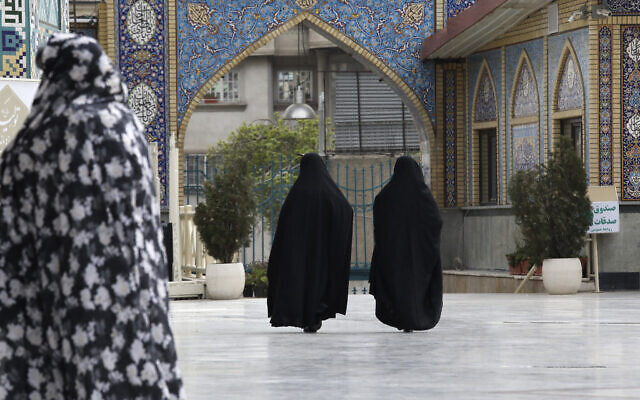 No other country in the world treats women worse than Iran so the morons at the United Nations elected Iran to the Commission on the Status of Women.

It doesn’t help that a powerful Demonic entity stands over Persia or Iran. Influencing political and religious leadership.

‘But the prince of the kingdom of Persia withstood me twenty-one days; and behold, Michael, one of the chief princes, came to help me, for I had been left alone there with the kings of Persia. ‘

Head-to-toe veiled Iranian women walk at the shrine of Saint Saleh in northern Tehran, Iran, April 6, 2021 (Vahid Salemi/AP) Activists have expressed astonishment over the election of Iran to the United Nations’ top forum for women’s rights, apparently with the backing of at least four Western democracies. “This is surreal,” Iranian women’s rights activist Masih Alinejad tweeted Wednesday after Iran joined the UN’s Commission on the Status of Women. “A regime that treats women as 2nd class citizens, jails them for not wearing compulsory hijab, bans them from singing, bars them from stadiums & doesn’t let them travel abroad without the permission of their husbands gets elected to UN’s top women’s rights body,” Alinejad wrote . Free Sign Up Hillel Neuer, executive director of the UN Watch lobby group, said: “It’s absurd — and morally reprehensible. This is a black day for women’s rights, and for all human […]

Click here to view the source of this article www.timesofisrael.com

← Prev: Hate Speech: LeBron James Tweets "Your Next" to the Columbus Police Officer that Saved the Lives of Two Teenage Girls Next: The magnitude of insidiousness in the new outdoor guidelines by the CDC is Orwellian for sure - But more than that it's Evil →