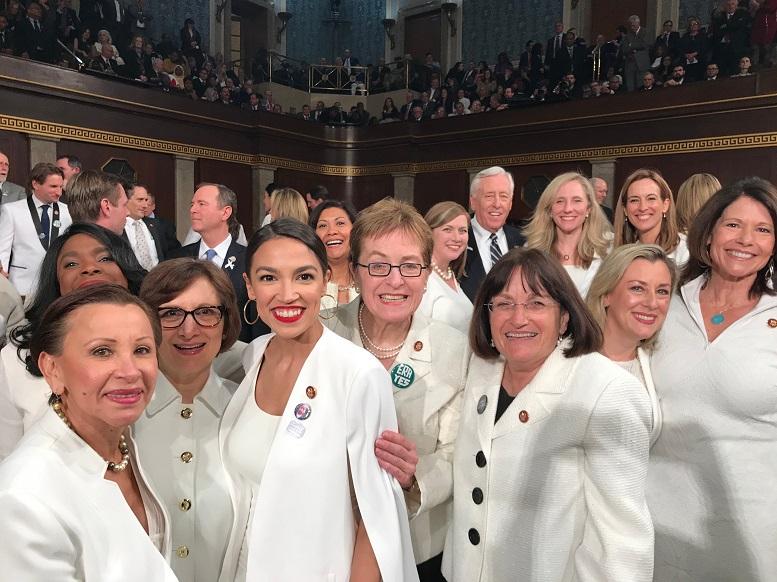 Pro-abortion politicians made sure they were noticed during President Donald Trump’s State of the Union Address on Tuesday by wearing all white to the event.

Supposedly, the white worn by House Speaker Nancy Pelosi and others symbolized the early suffragettes and their tireless advocacy for women’s rights.

“Nearly 100 years after women earned the right to vote, more than 100 women are serving in Congress,” Florida Congresswoman Val Demings wrote on Twitter. “Tonight the @HouseDemWomen are wearing suffragette white to remind the president that we—and the rights our ancestors fought for—aren’t going anywhere.”

Their not-so-subtle statement really appeared to be about the president’s pro-life policies, not women’s rights, however. Democrats often conflate abortion with women’s rights.

But the interesting thing about their all-white protest is that the pro-abortion politicians do not appear to know their history. As LifeNews pointed out Tuesday evening, the early suffragettes were unashamedly pro-life.

Tonight, pro-abortion members of Congress are wearing all white, supposedly to represent the early women suffragists.

They just forgot one thing…

The first-wave feminists took the opposite position on abortion to many feminists today. Suffragette Alice Paul, who was instrumental in campaigning for women’s right to vote, described abortion as “the ultimate exploitation of women.”

Susan B. Anthony and Elizabeth Cady Stanton also took a firm stand for unborn babies by refusing to publish ads for abortion in their newspaper, “The Revolution.” They also ran a number of articles and editorials against abortion.

And Victoria Woodhull, the first woman to run for president of the U.S., wrote about the injustice of abortion in her feminist newspaper:

“Wives deliberately permit themselves to become pregnant of children and then, to prevent becoming mothers, as deliberately murder them while yet in their wombs. Can there be a more demoralized condition than this?… We are aware that many women attempt to excuse themselves for procuring abortions, upon the ground that it is not murder. But the fact of resort to so weak an argument only shows the more palpably that they fully realize the enormity of the crime.”

Some of America’s first female doctors, suffragette Drs. Elizabeth Blackwell and Charlotte Lozier, opposed abortion as well. Even mainstream media outlets, including the BBC, readily acknowledge that the early feminists were opposed to abortion.

The Democrat politicians in white do not represent the early feminists any more than they represent women today. Their policies support destroying the lives of babies in the womb just because they are girls, allowing abortion facilities to operate unchecked by even basic medical standards, and even permitting infanticide. These views are abhorrent to most Americans, including most women.

Many women today are fighting back against the notion that abortion is freedom. They are advancing the early feminists’ wisdom by supporting both mothers and their unborn babies. Pro-life feminists of today and yesteryear know the truth, that women never will gain freedom by destroying the rights of their own children. Only by furthering the rights of both mothers and their children will individuals truly be free.