WATCH: Christians Arrested for Praying Outside Abortion Clinics Where Abortions are Deemed “Essential” 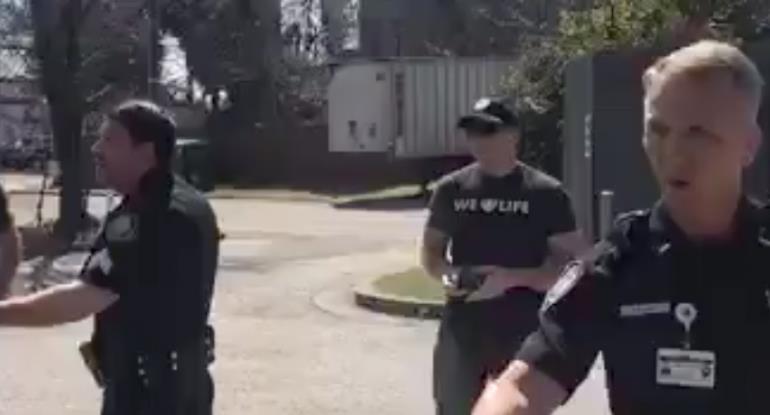 Pro-life Christians are being persecuted across the United States for trying to save unborn babies from abortion during the coronavirus outbreak.

While many state and local governments have issued orders to prevent the spread of the coronavirus and save lives, some are allowing abortion facilities to remain open and continue killing unborn babies.

On Saturday, pro-lifers with Love Life said they tried to follow social distancing mandates while still ministering to people outside an abortion facility in Greensboro, North Carolina.

A video posted online by Love Life showed the brief interaction between the pro-life leaders and police. The pro-lifers can be seen maintaining a distance between themselves and others to abide by the distancing requirements. The organization also stopped its regular group gatherings because of the coronavirus outbreak and is encouraging people to pray individually instead.

Because Love Life is a religious non-profit that provides social services, the organization said its work should be allowed to continue, both according to the language of the Guilford County mandate and the U.S. Constitution.

“[Our] lawyer even called the lead law enforcement officer on the trip to Greensboro and the officer refused to even discuss the ordinance …” the organization said in a statement. “Upon walking up to the abortion clinic, Justin Reeder, LOVE LIFE’s lawyer, and another minister were immediately confronted by between six to eight police cars and cited and arrested.”

Though they thought they were abiding by the law, trying to keep themselves and others safe and save lives, they were arrested. Meanwhile, the abortion facility continues to destroy unborn babies’ lives unhindered because it is deemed an “essential” service.

“Abortion centers remain open for business as usual,” Love Life said. “There were over 20 women and children packed into that very small building in Greensboro which has to have a very small waiting room. It seems apparent that these women and children were permitted to be in close proximity with one another, against CDC guidelines, and puts them at risk for infection.”

According to Love Life, pro-life sidewalk counselors helped save at least six unborn babies on Saturday in New York City and Charlotte.

“Until the doors of abortion centers are closed, we are encouraging and challenging The Church and all Christians across this nation to start prayer walking individually at their local abortion centers where innocent lives are being taken,” the organization said.” Let’s be diligent to practice social distancing while we prayer walk. ”

Pro-life advocates in Ohio experienced a similar encounter with police last week. As they reached out to women at the Planned Parenthood abortion center in Columbus, Ohio — which is operating in defiance of a state mandate to stop non-essential medical procedures, a police officer threatened to cite people with the pro-life organization Created Equal for violating an emergency distancing mandate.