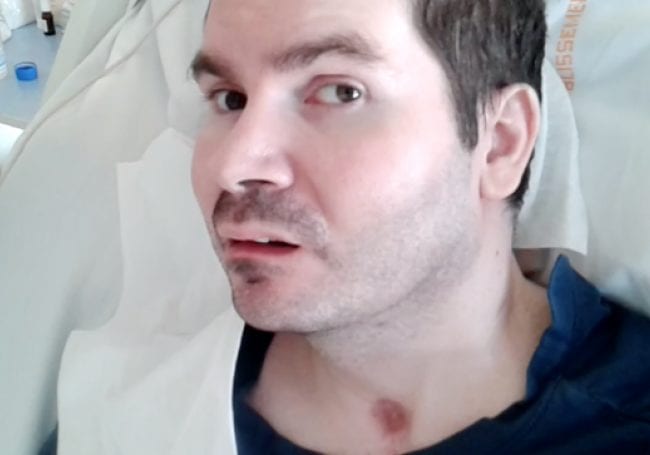 The father of a disabled man who is slowly being starved to death in France slammed the hospital for supporting “murder in disguise” on Sunday.

Doctors removed the water and feeding tubes from Vincent Lambert, 42, on Sunday after a lengthy court battle over his medical care, Agence France-Presse reports. He is expected to die slowly of dehydration within the next few days.

On Monday, his parents, Pierre and Viviane Lambert, said they are “resigned” to his death after they exhausted all options to save his life. Reports indicate the aging couple stayed beside their son’s hospital bed Sunday as doctors removed his food and water tubes.

“We have nowhere else to turn and now it’s too late. Vincent is dying,” his parents Pierre and Viviane Lambert said in a statement. They said his condition now is “medically irreversible.”

Pierre, who is 90, criticized the courts and doctors for killing his son, saying it is “madness” to starve a disabled man to death.

His mother, Viviane, expressed similar desperation in a letter to French President Emmanuel Macron in May, writing: “Mr. President, my son was sentenced to death … my son did not deserve to be hungry and dehydrated … Vincent’s not in a coma, he’s not sick, he’s not connected. It’s not a machine that keeps my son alive. He’s breathing without assistance. … Vincent is disabled but alive,” according to the Church Militant.

His parents and two of his siblings fought a long legal battle against Vincent’s wife, several other siblings and doctors who all believed it is time for him to die. Vincent has been in the hospital since 2008, when he became quadriplegic and suffered severe brain damage from a motorcycle accident.

On June 28, the French high court ruled in favor of the doctors’ removing his life support, according to the report.

His doctors and other medical specialists confirm Vincent can breathe without the assistance of a respirator and he also responded to external stimuli. His condition was listed as stable prior to removal of basic medical services keeping him alive.

Viviane and Pierre Lambert were both present on Sunday when their defenseless son was deprived of life-sustaining nourishment.

AFP reports one of his younger sisters, Marie, fought to remove his food and water, believing that her brother would not want to live this way. She said doctors assured her that her brother is “not suffering” because of the pain medication.

“We are in the last stage of the process. The effects of dehydration are now being felt but we don’t know how many days it will take,” Marie said. “This waiting is very painful for everyone.”

The case has drawn the attention of international human rights advocates. Many see similarities to the fight over the life of Terri Schiavo, an American woman who died by slowly being starved to death after her life support was removed based on her husband’s wishes. Schiavo’s family also lost a long legal battle to provide medical care to their daughter. ← Prev: China's Evil Regime "Religious Minorities Are Brought to 'Thought Transformation' Camps in China" Next: Father Adores Daughter With Down Syndrome: “I Fell in Love With This Precious Gift God Has Given Us” →