Vice President Mike Pence Makes It Clear to Joe Biden: “I’m the VP of the United States of America” 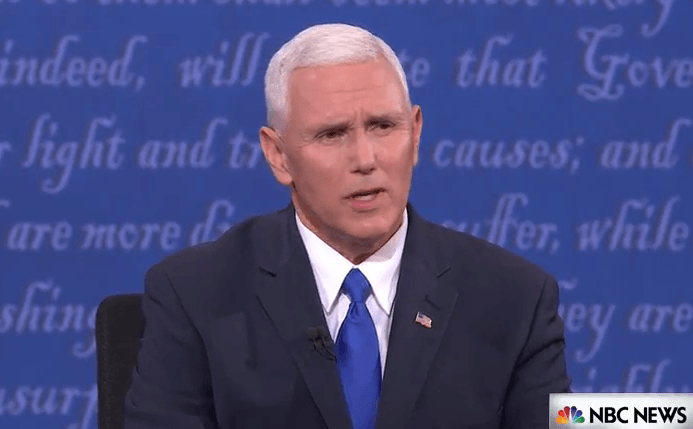 Vice President Mike Pence took a shot at former Vice President Joe Biden Friday, saying, “Let me be clear, I am the vice president of the United States of America.”

The current vice president spoke at a GOP retreat Friday morning in Baltimore and mentioned that he heard Biden refer to himself as vice president at the Democratic debates Thursday night.

“Let me be clear: I am the vice president of the United States of America,” Pence told the audience amid thunderous applause, according to a tweet from Rachel Campos Duffy.

Biden responded to an attack from 2020 presidential candidate Julian Castro Thursday about deportations during the Obama administration by calling himself the vice president of the United States.

“The president did the best thing that could be done at the time,” Biden said.

“How about you?” moderator Jorge Ramos questioned Biden.

“I’m the vice president of the United States,” Biden responded.

“He wants to take credit for Obama’s work, but not answer any questions,” Castro responded.

← Prev: Israeli Prime Minister Benjamin Netanyahu Vows to Annex Parts of the West Bank if He Wins Election Next: India May Follow China’s Lead With a Population Control Policy of Forced Abortions →