Trump Slams Abortion, Infanticide in SOTU: “All Children, Born and Unborn, Made in the Image of God” 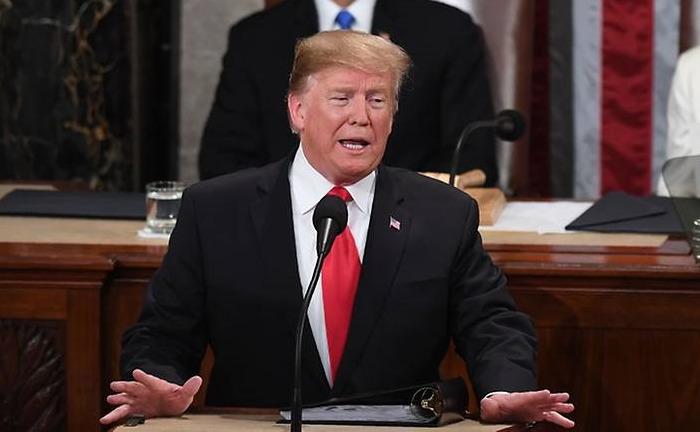 President Donald Trump gave a clear and forceful message on pro-life issues during the State of the Union Address tonight.

There could be no greater contrast to the beautiful image of a mother holding her infant child than the chilling displays our nation saw in recent days.

Lawmakers in New York cheered with delight upon the passage of legislation that would allow a baby to be ripped from the mother’s womb moments before birth. These are living, feeling, beautiful babies who will never get the chance to share their love and dreams with the world.

And then, we had the case of the governor of Virginia where he stated he would execute a baby after birth. To defend the dignity of every person, I am asking Congress to pass legislation to prohibit the late-term abortion of children who can feel pain in the mother’s womb.

Let us work together to build a culture that cherishes innocent life.

And let us reaffirm a fundamental truth — all children — born and unborn— are made in the holy image of God.

In emails to LifeNews, pro-life groups praised the President:

We greatly appreciate the leadership President Trump has shown in advancing the cause for life during his time in office. Tonight, he used his State of the Union address to highlight the extremism of the pro-abortion agenda most recently and fully on display in New York and Virginia, and stressed the need for legislation like the Pain-Capable Unborn Child Protection Act. President Trump has once again demonstrated the paramount importance of protecting mothers and their unborn children.

“Once again President Trump has proved he is our nation’s most pro-life president ever and he is keeping his promise to the voters who fueled his victory,” said SBA List President Marjorie Dannenfelser. “The contrast between President Trump’s vision for the future and that of the Democratic Party, now dominated by abortion extremists, is stark. Senate Democrats had the chance yesterday to prove they are not the party of infanticide, and instead they doubled down on a radical agenda of abortion on demand through birth and even beyond. That position that is simply irreconcilable with the values of the American people. We ask Congress to heed President Trump’s request, and to send the Pain-Capable Unborn Child Protection Act to his desk without delay. This popular, compassionate legislation would protect unborn babies after five months – more than halfway through pregnancy, and a point at least by which these children can feel the pain of abortion.”

“The greatness of our nation is defined by the way we treat the most innocent and vulnerable among us, and the time for choosing is more pivotal than ever. All decent Americans must stand up, speak out, and defeat abortion extremism at the ballot box in 2020.”

“Never before has the contrast between the two parties been more clear, as there seems to be no line that the Democratic Party will draw when it comes to protecting either life in the womb or the health of women in abortion facilities. And as we saw with Pelosi’s guest, Planned Parenthood has friends in government as it draws in more than half-a-billion in taxpayer dollars.

“President Trump’s comments in support of life are an important call to action for all of us. I applaud him for using the bully pulpit to celebrate life.”

← Prev: Not One Single Senate Democrat Will Say They Oppose Infanticide Next: Worship Leader Writes Song to Protest NY Law for Abortions Up to Birth: Babies are “Not Forgotten” →