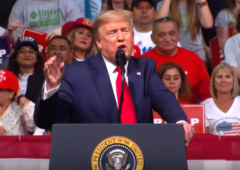 (CNSNews.com) – As the Democrat presidential hopefuls attacked each other in Nevada, President Donald Trump was basking in the cheers of his supporters at a rally in Arizona.

The president indicated that the Democrats are giving him plenty to talk about — when the time is right, closer to the election:

How’s he doing tonight? 132 congressional Democrats have signed up for Bernie’s health care takeover of the world. Think of this. 180 million Americans are going to lose health care coverage under this plan.

But if you don’t mind, I’m not going to criticize it tonight. Let them keep going and I will start talking about it about two weeks out from the election, because I don’t want them to change. Please don’t change.

Same with Green New Deal. I don’t want to talk about it tonight.

You know, I came up with the name Pocahontas too early. Fortunately, she self-destructed anyway…

Trump mentioned Sen. Bernie Sanders several times in passing, predicting that Democrats are going to take the nomination away from him again: “That’s OK, because we don’t care who the hell it is — we are going to win,” Trump said.