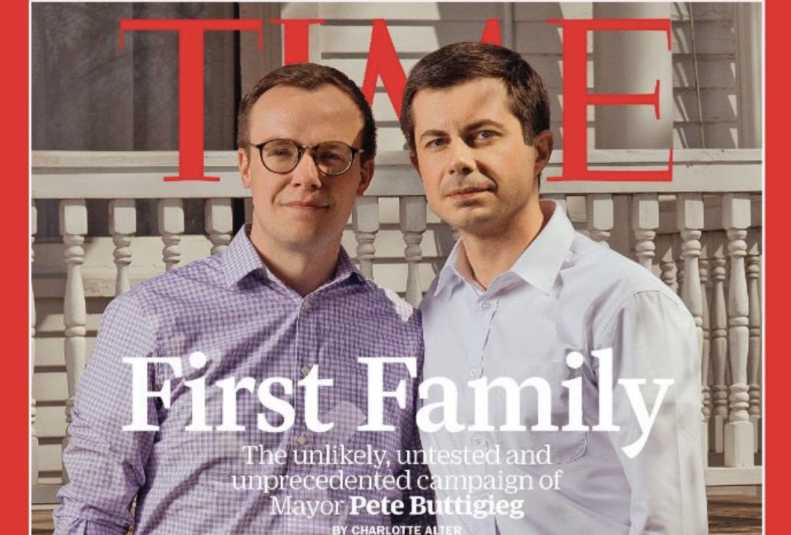 ‘Thou shalt not lie with mankind, as with womankind: it is an abomination.

‘And likewise also the men, leaving the natural use of the woman, burned in their lust one toward another; men with men working that which is unseemly, and receiving in themselves that recompense of their error which was meet.

Time Magazine has featured Democratic presidential candidate Pete Buttigieg and his “husband” Chasten Glezman on its May cover, with the large-lettered headline “First Family.”

The print version is expected to roll out on May 13, but the article itself is currently available on the outlet’s website. The report gives significant attention to Buttigieg’s homosexuality, and refers to the candidate as a “happily married Christian veteran.” “His youth is appealing to many voters, but it also means he’s green. The idea of electing the first gay president thrills liberals, but it also rallies opponents,” writes reporter Charlotte Alter. The article covers Buttigieg’s military service, that he dated women in college but was “strongly attracted to other young men,” and that Glezman’s parents were once opposed to his homosexuality, but came to change their mind. “Buttigieg met Chasten Glezman, then a […]

← Prev: Nurse Celebrates Abortions: “Every Abortion Has an Element of Good in It” Next: House Democrats Vote to Let Boys Play on Girls’ Teams →