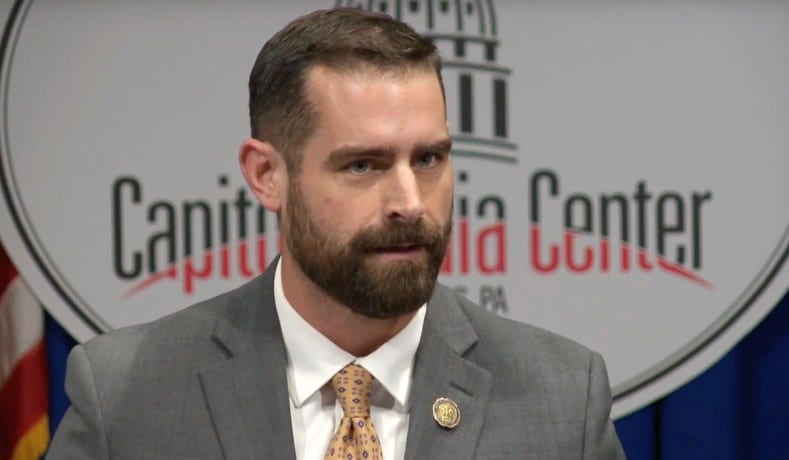 I suggested on Twitter just this past Monday that we should have a huge rally here at this planned parenthood, where our pro-life brothers and sisters have been harassed and bullied. I suggested that on Monday and here we are on Friday. Though twitter is a Godforsaken hellscape most of the time, it seems it has its uses.

I am grateful to all of you for coming here. I’m grateful to Lila Rose and live action for taking the reins on organizing.

As soon as I proposed this idea, and it started to take off, I immediately messaged Lila and said “Wait. People actually want to do the rally. I don’t know how to organize one. Please save me.”

And they did, thanks be to God. I’m grateful also to Abby Johnson for stepping up to the plate and to all of the local pro life leaders who have been fighting the battle here in this city for years.

I’m grateful most of all that we are not merely complaining. We didn’t just see a video online and shake our heads disapprovingly and send a frown-face emoji and move on. No, we decided to do something. We responded. We are here putting our skin in the game. Engaging on this issue in the real world, in three dimensions. And that’s what we need to do. I hope we continue. I hope this is not a one-off thing. I hope it becomes a trend.

For pro-life activists, this is nothing new. They’re always in the game. They’re always putting themselves out there. But we all need to be like that. We need to join them. And that’s part of what this event is about. We’re saying to the pro-life activists who are on the front lines, taking the slings and arrows, that they are not alone. That we are with them. And that should not just be our message today. We can’t be with them only today. We have to stay with them. It’s not enough to simply be pro life in our heads. We have to live it, act it, fight for it. That’s what we’re doing today.

Now there are two fundamental messages that we want to get across.

Brian, I know why you use scare tactics, why you bully, why you try to intimidate. Because that’s all you have. You have no arguments to present. You have no case to make. You have only chest thumping and school yard taunts. Well they won’t work. It isn’t good enough. And I reiterate what I said earlier in the week. Brian, if you want to shove a camera in someone’s face, if you want to scream at someone, if you want to bully someone, I’m right here. I’m right here. Pick on someone your own size, Brian. Let’s meet man to man and have a real discussion. Let’s not harass women and children. Let’s be men of honor and dignity and intellect. I can look you in the eyes and tell you why I think babies should not be killed. Anyone here can do the same. Can you look us in the eyes and tell us why you think they should be killed? That’s the question

But the abuse that pro-lifers suffer is nothing compared to the suffering of children in the womb. And that’s the first and most important reason that we all are gathered here.

And this is not just any 60 million. Think about the victims here: Children. The most innocent, the most pure, the most beautiful of all people are the precise ones we have targeted. They have harmed no one. They are filled with joy and potential and love. If we cannot see the value and worth of a child, then who can we see it in?

They call abortion a “reproductive rights” issue. It is not. By the time the abortion happens, reproduction has already occurred. Nobody is suggesting that a woman ought to be forced to reproduce. What we are arguing is that nobody has the right to kill a human who has already been produced. Abortion is not a reproductive health decision. It is much more a parenting decision. Am I going to care for my child or kill him? That is the decision being made.

Pro-aborts want to find some ulterior motive in the pro-life cause. They say we’re only out to control women’s bodies. It’s a patriarchal conspiracy. Well I look around here today and I see a whole lot of women. If this is the patriarchy, the patriarchy sure has a lot more estrogen than I expected.

No, we are not looking to control women. We have no ulterior motive. Our motive is very simple: to protect innocent life. Why do we want to protect it? Because human life is precious. That’s it. That’s our whole point. Our entire argument can be summed it in three words: life is precious. It’s the most precious thing in the world.  Children are sent here, to this earth, to live. That is the only thing a person can do with life — live it.

And to deprive someone of the beautiful privilege, and responsibility, and right to live, is an unspeakable injustice. It is injustice whether that person is 7 or 17 or 70 — or 7 weeks in the womb. If anything, the injustice only becomes more pronounced as you go younger and younger because the younger the victim is, the more of existence they leave on the table, the more life that goes unlived. And there is no form of waste more tragic than an unlived life.

LifeNews Note: The above are the written remarks pro-life advocate Matt Walsh delivered today at the Pro-Life Rally Against Bullying.

← Prev: Ben Shapiro Slams BBC for Saying Pro-Lifers “Want to Take Us Back to the Dark Ages” Next: Planned Parenthood CEO Falsely Claims “There’s No Such Thing as Abortions Up to Birth.” Here’s the Truth →