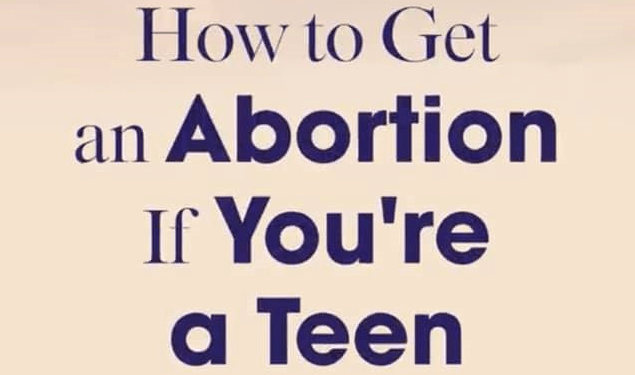 Teen Vogue has completely sold out to the abortion industry.

Over the weekend, the magazine encouraged its young readers to engage in risky, life-destroying behavior by teaching them how to get an abortion.

CBN News reports the magazine posted a series of images on Snapchat promoting abortions among teens. The messages do not encourage teens to consider their options, including parenting and adoption, or explain the possible risks. Instead, they treat the killing of an unborn baby as a normal, viable option.

They also tell young girls how to skirt parental consent laws to get an abortion without their parents’ knowledge.

Teen Vogue began promoting its new pro-abortion campaign, “How to Get an Abortion if You’re a Teen,” in an article in June, according to CNS News. On Saturday, it pushed the message even harder on Snapchat.

Snapchat is very popular among American teenagers. eMarketer estimates that 92 percent of children ages 12 to 17 use the social media site.

“Having access to abortion should be your right, regardless of your parents’ beliefs,” Teen Vogue tells young girls. “Unfortunately, not every state legislature agrees so the first step is knowing your state’s rules when it comes to parental consent.”

Though the magazine did encourage teens to tell their parents if they are pregnant, it also instructed teens on how to hide an abortion from their parents.

“There is another legal option in many states that would let you get an abortion without parental approval called a judicial bypass procedure — but it takes time and involves testifying before a judge,” the magazine states. “In any case, you can also contact your local abortion fund if you need help paying for it on your own.”

These messages are part of a larger campaign by abortion activists to end parental consent and parental notification laws. Currently, 37 states currently require some form of parental involvement before a minor aborts her unborn baby.

Parental consent laws do help minors, and they have strong public support. They can help protect young girls from sexual abusers who often use abortion to cover up their crimes. The laws also help protect vulnerable teens from making a hasty, uninformed decision to abort their unborn babies – something they may later regret. And research shows that these laws help save unborn babies from abortions.

But these protective laws are the latest target of the abortion industry.  This year, Illinois, Massachusetts and Rhode Island are considering bills to end their parental involvement laws.

“Unborn children have no rights, but teenage children should have all right to bodily autonomy, including consent to dangerous, irreversible procedures like abortion without their parents’ involvement?” Johnson responded. ← Prev: Teen Vogue Uses Snapchat to Teach Teens How to Get an Abortion Next: Tennessee Bill Would Ban Abortions When Unborn Baby’s Heart Begins Beating →