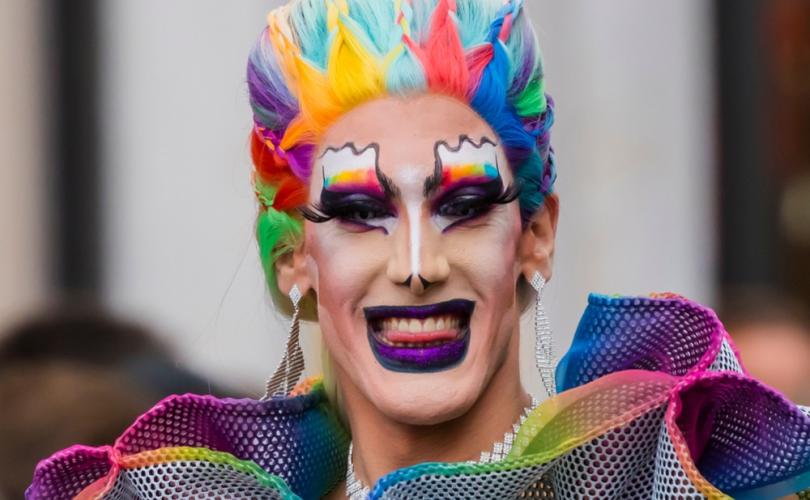 Satan’s future is set in stone. He and all he deceived will be tossed in the lake of fire where he will remain for eternity.

‘The devil, who deceived them, was cast into the lake of fire and brimstone where the beast and the false prophet are. And they will be tormented day and night forever and ever.’

October 24, 2019 (LifeSiteNews) — Men who dress as women love Halloween, and not just for the costuming opportunities. They are often keenly attuned to the dark spirits of the season and willing to do those spirits’ bizarre, depraved bidding.

It’s one more reason to keep vulnerable children away from homosexual/gender indoctrination sessions, “drag” tutorials, and parents-excluded “safe sex” discussions at your local library. These wicked people are eagerly seducing and grooming children right under our eyes, if we let them.

Drag queens are a scary presence for little kids. The young, mesmerized faces hearing the allegedly “inclusive” lessons and watching the sexual gyrations tell the real story. Something’s strange in this neighborhood, and youngsters get it, even if their clueless parents giggle and nod alongside the corrupted librarians.

The truth is, gender-benders’ public readings and sexualized performances are often influenced by an otherworldly realm. It turns out that many “drag” identifiers follow paganism, witchcraft, or Satanism. They don’t even try to hide this close connection.

For instance, in a recent tweet, the Church of Satan said, “We can confirm that there are a lot of Satanic drag queens. And they are fabulous.”

And the San-Francisco-based Satanic Temple is made up mostly of “LGBTQ” identifiers, even holding a “Pink Mass” at times. A movie made about the group is called Hail Satan, where the leaders say they’ll fight Christian conservatives “to the death.”

Are they serious about following Satan? Who knows, and who cares? Anyone who adopts his name is, tragically, fair game. Satan will exploit and manipulate these fools to his hearts’ desire, and they may never know it.

A drag-devil partnership is popping up everywhere. There are reports of Austin, Texas–area “drag” followers engaging in occult rituals (including black masses) in public parks to “hex” two city council members, courageous people who publicly objected to the perverted “story hours” at local public libraries.

And a church in Chula Vista, Calif. was vandalized in September with satanic symbols. Some of the members had spoken out against a local “drag queen” event. This doesn’t reflect well on the themes of love and acceptance that “drag queens” insist motivate their events.

In Long Beach, California in 2017, a photo surfaced of a devil-horned library presenter whom one homosexual website dubbed a “Satanic goddess.” Quickly dismissed as a joke, one has to ask, so what? Does any discerning parent want someone to read books to their children — or do anything with our kids — who dresses like a freak and jokes about such serious matters?

← Prev: How Stupid 'Elizabeth Warren' Considers a Outreach Program for Atheist and the Ungodly Next: Breaking: Judge Overturns Jury, Says Father Will Have a Say in Whether Mother Can ‘Transition’ Son Into ‘Girl’ →