Pro-Lifers Arrested for Praying Outside Abortion Clinic, But They Saved Two Babies Beforehand 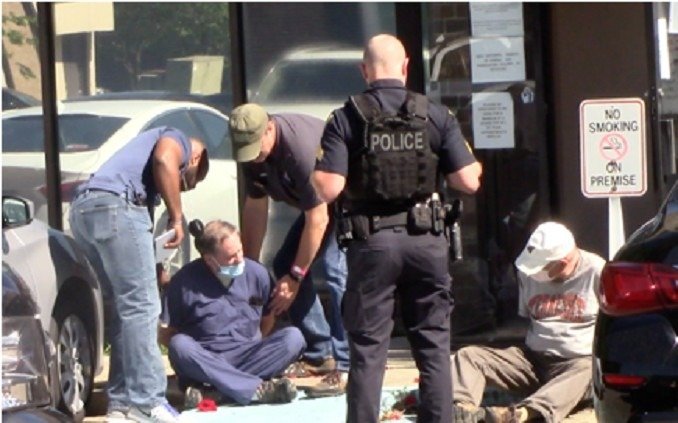 Monica Migliorino Miller, director of Citizens for a Pro-Life Society, told LifeNews.com that at least two women did not go through with their abortions at Delta Clinic because of their Red Rose Rescue.

Two of the rescuers, Will Goodman and Tony Puckett, were arrested after refusing to leave the property, she said. They both were charged with failure to disperse.

Miller said both Goodman and Puckett were wearing personal protective equipment when they walked into the unlocked abortion facility with roses and information about pregnancy resources. Inside the waiting room, she said they joined four women who were waiting for abortions.

However, she said they noticed that only the security guard and receptionist wore face masks; the other abortion clinic employees did not.

Once the staff realized what Goodman and Puckett were doing, she said they told the pro-life rescuers to leave. Miller said one clinic worker “became furious” and “pulled all but one rose out of Goodman’s hands, threw them on the floor and demanded Goodman and Puckett leave the facility.”

When the men refused, a clinic worker “grabbed Goodman’s shoulder at which point Goodman dropped to the floor in a passive posture. Puckett, still holding his roses, knelt down on one knee,” she continued.

“Soon one woman came out from the back hallway and, while Goodman was limp on the floor, she exited the building in tears. She did not obtain the abortion as the abortionist had not yet entered the building,” Miller said.

Outside, a second woman talked to one of their other pro-life rescuers and decided to leave, too, she said.

When police arrived, Miller said they dragged Goodman out of the abortion facility, while a security guard escorted Puckett out. When police told the men to leave the property, they refused.

“We cannot do that, officer,” Goodman said. “We are here to defend the helpless unborn scheduled to be put to death.”

Police then arrested the men and charged them with failure to disperse, she told LifeNews.

Because of their efforts, Miller said they believe at least two women chose life for their babies and eight others left the facility.

She said the rescuers’ “intention was to speak to all of the women arriving for their abortions who lined up on the parking lot waiting their turn to enter the abortion facility.”

Though Louisiana abortion facilities are supposed to be closed during the coronavirus crisis, they have been defying state orders and continuing to kill unborn babies in elective abortions. Pro-life leaders have been urging state leaders to enforce their orders and close the facilities. ← Prev: Joe Biden’s Hypocrisy Exposed in Interview: You Said Believe Christine Ford But Not Tara Reade Next: Tara Reade Says She Is Willing To Testify Under Oath That Joe Biden Sexually Assaulted Her →