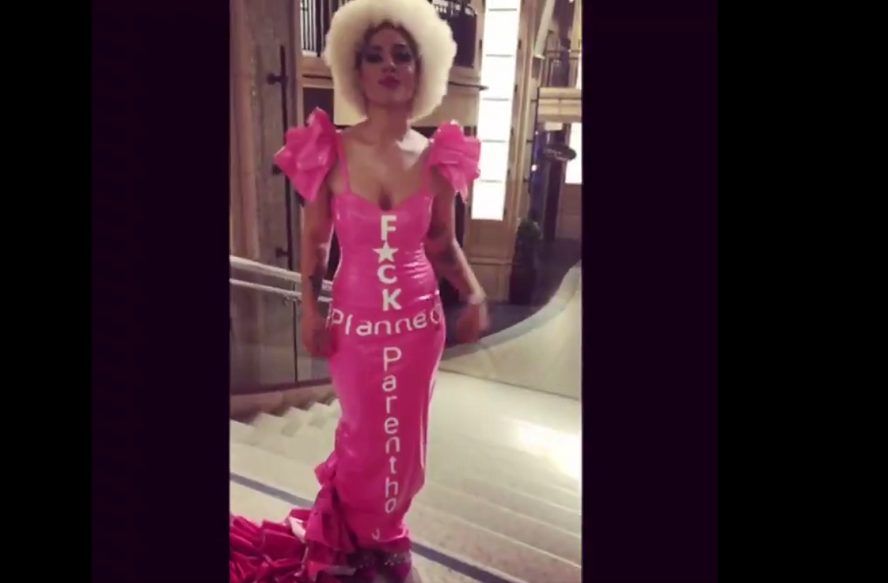 Pro-life singer Joy Villa made a daring political statement Monday when she wore a dress that used profanity to condemn the abortion giant Planned Parenthood.

Appearing at the premier of the film “Unplanned” in Los Angeles, Villa wore a bright pink gown with the words “F— Planned Parenthood” in bold letters down the front, according to Fox News. The film is based on the life of Abby Johnson, a Planned Parenthood director-turned pro-life advocate.

“Yes, I believe in women’s health-care clinics, but abortion is not health care and Planned Parenthood has been pushing that and indoctrinating girls with pink and girliness,” Villa told the Hollywood Reporter. “So that’s why my dress is hot pink and very girly.”

The color of the dress is very similar to what Planned Parenthood uses to advertise itself. Planned Parenthood is the largest abortion chain in America, aborting about 330,000 unborn babies every year, according to its annual reports.

Villa said she and Johnson discussed the design before she had the dress made.

“I told Johnson I wanted to do a custom dress for the premiere because I wanted her to be in on it, because this is her film, her story, it’s very personal. She wrote it and produced it. So we came up with some options,” Villa said.

“She went on to make an offhand remark and said, ‘or we could always do ‘F— Planned Parenthood,’” Villa told the Hollywood Reporter. “It’s controversial enough to get people’s attention and it also is the underlying message of the film.”

Desi Lee Allinger-Nelson, of Desi Designs Couture in Orange County, designed the dress, which also displayed the title of the film, “Unplanned,” on the train, according to the report.

Villa encouraged people to watch the film, despite its “R” rating.

“It does show an abortion, but it’s not necessarily, gratuitously graphic,” she said, describing one scene where Abby has an abortion. “So in that context, it’s brutal and it’s violent. I think that an R rating makes it more notorious. I think you should be at least 14 or 15 to see it.”

Villa is an outspoken conservative who often makes political statements through fashion. In 2018, she wore a dress with the image of her unborn daughter to the Grammys. She also carried a matching purse with the words “Choose Life” painted across it.

“Unplanned” will be in theaters starting March 29. Visit UnplannedFilm.com for more details.