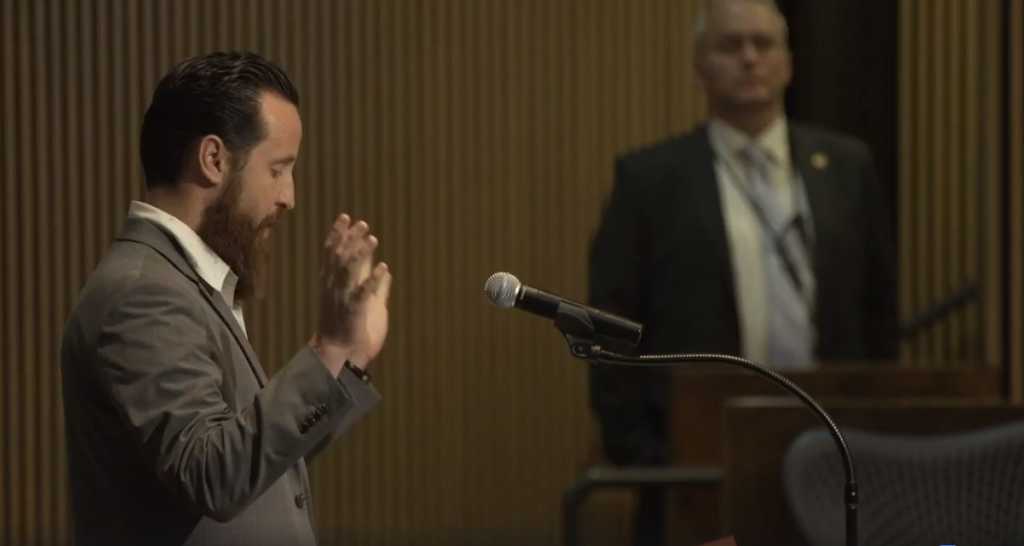 Pastor Jeff Durbin, the head of “End Abortion Now” and the founder of Apologia Studios, recently delivered a powerful address before the Phoenix City Council highlighting the horrors of abortion.

“We’re coming once again to remind you of the modern-day holocaust that is occurring all around us,” Durbin declared at the beginning of his address.

Over recent months, many from his organization and sphere of influence have been lobbying local councils through powerful and convicting speeches about the realities of abortion.

“Defenseless human beings are being dismembered, chemically burned, disemboweled and decapitated in your city, under your watch and jurisdiction,” Durbin said.

“These murders are occurring regardless of the fundamental law of God against the unjustified killing of human beings — ‘thou shalt not kill’ — and regardless of the unchanged Arizona law against abortion — AZ Statute 13-3603,” he noted.

The statute referenced by Durbin, which he insisted is “still on the books,” is an Arizona State Criminal Code that reads as follows:

“A person who provides, supplies or administers to a pregnant woman, or procures such woman to take any medicine, drugs or substance, or uses or employs any instrument or other means whatever, with intent thereby to procure the miscarriage of such woman, unless it is necessary to save her life, shall be punished by imprisonment in the state prison for not less than two years nor more than five years.”

“Does that help in our modern culture?” Durbin asked. “If we frame the need for justice for these fatherless children in the words of our modern social justice warriors, will you act and begin upholding righteousness and protecting these image-bearers of God?”

“Let’s try it,” Durbin declared, as an official shuffled uncomfortably in the background.

“Long ago, in a patriarchal society, a group of white cisgender males delivered an ignorant and unscientific court opinion that allowed people to target a group of oppresse identitieses in the womb,” he explained. “Some of the human beings were potentially gay, lesbian and transgendered.”

This landmark decision, Durbin said, “was based on social power, prejudice and privilege” and was “aimed at promoting ageism.”

Durbin added that the issuing of the Roe v. Wade decision was “an example of collusion” that took place “not long after whites didn’t like sitting near black people on buses.”

“Will this catch our attention now?” Durbin asked. “Or shall we simply recognize that the murder of innocent and defenseless human beings is a moral atrocity that should never be accepted.”

Referencing the history of turning a blind eye to slavery and racism in America, Durbin highlighted that “we have experienced a sort of dehumanization before,” and that we must not make that same mistake again.

“We look back in horror with squinty eyes and stomachs turning. Not long ago, it wasn’t small and defenseless human beings in the safe sanctuary of their mommies,” he said. “It was people with black skin.”

In the same vein, Durbin added, millions of average German citizens bought Hitler’s anti-Semitic rhetoric of the late 1930s and began to deny the humanity of their Jewish neighbors.

“We are engaging in the highest form of hypocrisy if we puff our chests and look down our noses at slave traders and German soldiers and sit quietly and impotent while children are slaughtered in the wombs of their mommies,” Durbin declared.

The pastor noted that unborn children “are image-bearers of God” and fully human “according to all modern biological science.” As such, he said, they should be wholly protected under the law.

“I call upon you to turn to God, to wield the sword of justice with righteousness, be impartial and stop the slaughter of human beings in the womb,” he concluded. “Turn to Christ and live.”

Go to Source
Author: Will Maule