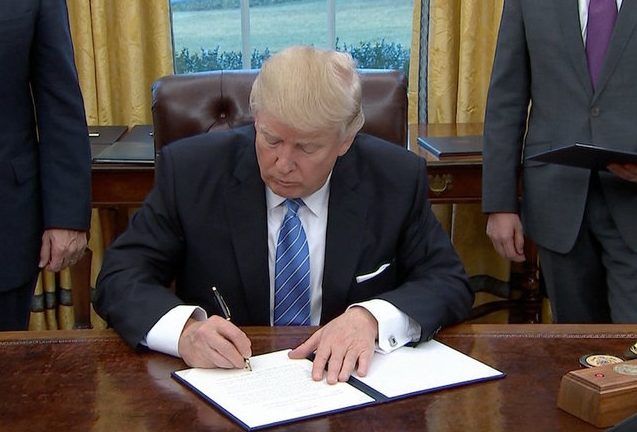 During his first week in office, President Donald Trump issued an executive order known as the Mexico City Policy or the Protecting Life in Global Health Assistance Act that revoked taxpayer funding to the International Planned Parenthood abortion business.

The policy prohibits taxpayer funding to international groups that promote and/or provide abortions overseas, the biggest of which is IPPF. Trump’s decision applied to nearly nine billion dollars in U.S. taxpayer funds to foreign non-governmental organizations. The policy ensures U.S. funds continue to go to health care, humanitarian relief, and even family planning; it only blocks funding to those groups like IPPF that perform or promote abortion in oher nations. Ultimately, that cost Planned Parenthood’s internatiopnal abortion company $100 million.

Today, Secretary of State Mike Pompeo and the Trump Administration announced new enforcement mechanism designed to expand this executive order to the broadest extent possible Pompeo announced that the U.S. State Department will refuse to work with any foreign non-governmental organization (NGO) engaged in the abortion business. The State Department will also refuse to fund foreign NGOs that give money to other foreign NGOs engaged in the international abortion industry.

“By ensuring enforcement and compliance with existing pro-life policies, Secretary of State Pompeo and the Trump Administration reaffirm their commitment to protecting innocent human life at home and abroad,” said Carol Tobias, president of National Right to Life. “We applaud Secretary of State Mike Pompeo for his dedicated pro-life leadership and for his efforts to ensure that taxpayer dollars are not used to fund or promote abortion overseas.”

Family Research Council President Tony Perkins commented: “The abortion industry is well known for relentlessly pursuing taxpayer dollars — and will exploit any opportunity to grab US taxpayer funds. Thankfully, President Trump and Secretary Pompeo are just as relentless in working to ensure taxpayers aren’t forced into a partnership with the abortion industry overseas.

“From day one, the Trump administration has set to work to build a wall between taxpayers and international abortion-on-demand. This president has gone beyond stopping the pro-abortion policies of Barack Obama. He is restoring and even expanding the pro-life policies of Ronald Reagan,” Perkins added. “Family Research Council and the pro-life movement will continue to work with President Trump and Secretary of State Mike Pompeo in bringing about a culture of life in which every child is welcomed into this world and protected under our laws, both here and abroad.”

Kristan Hawkins, president of Students for Life of America, also praised the president in remarks to LifeNews.com.

“The Trump administration has been the most pro-life administration in history, and Secretary Pompeo and President Trump should be thanked for closing the loopholes that allowed NGOs to take our taxpayer dollars and give them to sub-contractors that commit or promote abortions. This is an 80-20 issue, and the American people have made it clear they do not want their taxpayer dollars subsidizing abortions. This step will start to rectify the mistakes we made in enshrining abortion into Kenya’s constitution, a grave mistake made by the Obama administration,” she explained.

This policy will close the 90 to 95% of the loopholes that allowed NGOs to skirt the Mexico City Policy’s prohibitions on taxpayer-funding of abortions through foreign aid dollars, Hawkins said. According to the announcement, NGOs will have to provide certification to the State Department that they are not involved with abortions.