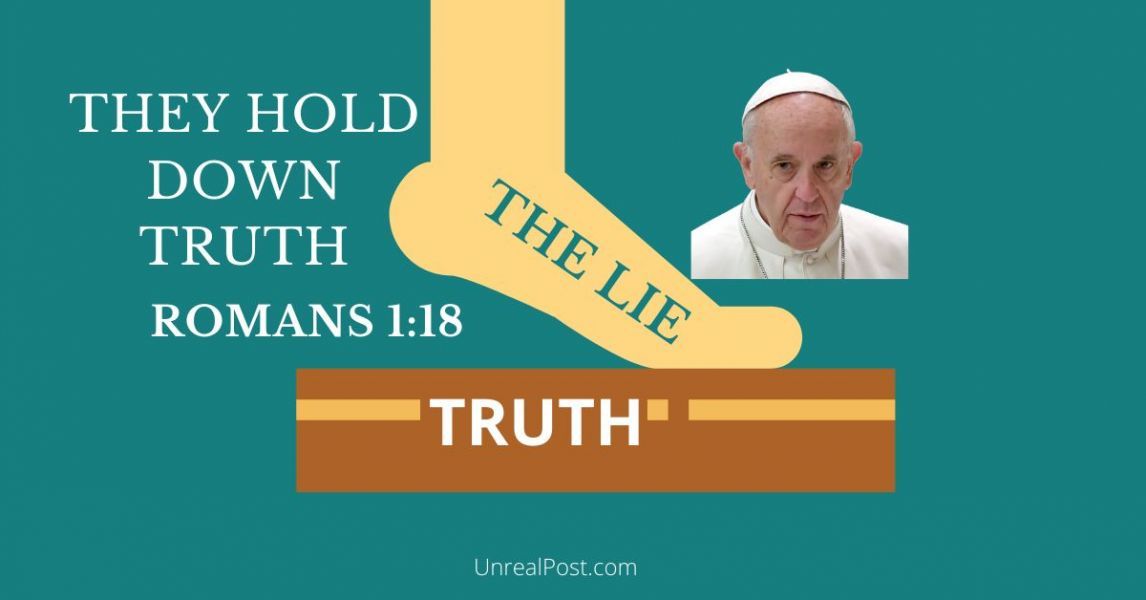 The leader of the Catholic Church Pope Francis rejects the Truth “Jesus Christ” and promotes and supports the lie from the father of lies, Satan

No, Pope Francis is not “The Anti-Christ” but is anti-Christ-like in his behavior more specifically with his words.

The leader of the Catholic Church worldwide Pope Francis endorsed same-sex civil unions for the first time as pope. He was being interviewed for the feature-length documentary “Francesco,” which premiered Wednesday at the Rome Film Festival.

“What we have to create is a civil union law. That way they are legally covered,” the pope said. “I stood up for that.”

“Homosexuals have a right to be a part of the family. They’re children of God and have a right to a family,” the pontiff says in a new documentary, “Francesco,” according to the Catholic News Agency.

“Nobody should be thrown out, or be made miserable because of it,” the Pope reportedly says in the doc, that premiered Oct. 21 at the Rome Film Festival.

The Pope is in complete opposition to the commands of God with regard to marriage. He knows the truth, the Pope knows what God has declared regarding marriage. But the head of the Catholic Church has chosen to suppress the truth with unrighteousness.

Romans 1:18 makes clear what the Pope is doing. The Greek (κατέχω) implies they are holding down or literally standing on truth with their feet; the Pope is literally trampling underfoot the “Truth” with unrighteousness.

Yes, Jesus Christ is “the TRUTH” and the Pope is trying his best to hold Christ underfoot. But we know he and all that try will fail because sin, the curse, Satan, and even death have already been defeated because of the cross (1 Corinthians 15:55-57).

‘Therefore a man shall leave his father and mother and be joined to his wife, and they shall become one flesh.’

‘Marriage is honorable among all, and the bed undefiled; but fornicators and adulterers God will judge.’

This departure from the faith, this deception is part of the end-time scenario. Moreover, this reminds me of what the prophet Isaiah said in Isaiah 57:4 when describing the nation of Israel’s rebellious and Idolotruous behavior toward God.

‘Whom do you ridicule? Against whom do you make a wide mouth And stick out the tongue? Are you not children of transgression, Offspring of falsehood,’

← Prev: Amy Coney Barrett: Roe v. Wade is Not a “Super-Precedent” That Can’t be Overturned Next: 'A Real Christian': Avengers Robert Downey Jr. Defends Chris Pratt after Twitter Denounces Him for His Christian Beliefs →