Pompeo: US Will Impose ‘Costs on the Decision-Makers’ in Iranian Regime For Any Attacks by Proxies 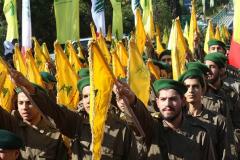 Hezbollah fighters near Sidon in Lebanon. (Photo by Mahmoud Zayyat/AFP via Getty Images)

(CNSNews.com) – Secretary of State Mike Pompeo warned Sunday that the U.S. will “impose costs on the decision-makers” in Iran for any attacks carried out by the regime’s proxies, whether in Iraq, Syria, Yemen or Lebanon.

The U.S. has made clear to the regime that attacks by proxy forces would not just invite retaliation against those elements, he told Fox News Sunday, but that “this cost would be brought home to them – to the leadership regime in Iran.”

On Saturday the Iran-backed Iraqi militia Kata’ib Hezbollah warned Iraqi forces to keep their distance from military bases where U.S. troops are stationed, clearly suggesting that it plans retaliatory attacks.

The IRGC-affiliated Fars news agency quoted KH security chief Abu Ali al-Askari as saying in a statement that Iraqi security force officers must not allow their troops to be used by the U.S. as human shields.

“Brothers in the Iraqi security services must stay away from the bases of the American enemy for a distance of no less than a thousand meters, starting from Sunday evening,” he said.

Following the deaths of Soleimani and Muhandis, Askari in an earlier tweet invited “lovers of martyrdom” to register to conduct “martyrdom” – that is, suicide – operations against “foreign Crusader forces.”

Another senior figure in the Iran-backed Iraqi militias, Ali al-Hosseini, said Sunday that the U.S. should know that a huge battle has begun.

“We intend to target the U.S. bases across the world, al-Hosseini told Al-Mayadeen, a Lebanese media outlet sympathetic towards Iran and its Lebanese terrorist proxy, Hezbollah.

The same outlet quoted Mohammed Raad, a senior Hezbollah leader, as saying revenge against the U.S., by the “axis of resistance” from Lebanon to Yemen, would be decisive.

And in Tehran, former IRGC commander Mohsen Rezai upped the rhetoric level, tweeting that if the U.S. retaliates to Iran’s military response, “we will raze Tel Aviv and Haifa to the ground.”

Rezai, himself a wanted international terrorist, is secretary of the regime’s Expediency Council, a body that advises supreme leader Ayatollah Ali Khamenei.

Pompeo told Fox News’ “Sunday Morning Futures” that the administration believes “there is a real likelihood that Iran will make a mistake and make a decision to go after some of our forces, whether they’re the military forces there in Iraq, or our soldiers that are in northeast Syria.”

“We have many troops in the region,” he said. “It would be a big mistake for Iran to go after them, but we are preparing.”

Threats directed against the U.S. by numerous Iranian regime figures and their proxies over the weekend prompted President Trump to tweet various warnings, such as one late Saturday night saying that in the event of another attack, “we will hit them harder than they have ever been hit before.”

He also threatened to strike 52 Iranian targets, representing the number of American diplomats, embassy staffers and others who were taken hostage in Tehran during the 1979 Islamic revolution.

Doing the round of Sunday news talk shows, Pompeo was challenged about that warning, and each time said what Trump was indicating is that the U.S. will hold the Iranian regime – directly – responsible for any actions its proxies in the region may take.

“We’ve made clear to the theocrats and kleptocrats that are running Iran today – running it into the ground against the will of their own people – we made clear to them that we would not respond just against these proxy forces that they run in Yemen and in Syria and in Iraq and in Lebanon,” he said on Fox News Sunday.

“We made clear that this cost would be brought home to them, to the leadership regime in Iran, and that we would raise costs. We wouldn’t just attack their asymmetric efforts, we would respond in a way that imposed costs on the decision-makers who are putting American lives at risk.”

Asked whether the U.S. was essentially saying to Khamenei, President Hassan Rouhani, and IRGC leaders that they shouldn’t think they are “off limits,” Pompeo replied, “What I’m saying is exactly what President Trump has said.”

“We will take responses that are appropriate and commensurate with actions that threaten American lives,” he said.

“I’ve seen what we are planning in terms of the target set,” he told ABC’s “This Week.”

“The American people should know that every target that we strike will be a lawful target, and it will be a target designed at the singular mission of protecting and defending America.”

← Prev: Nikki Haley: ‘We Responded with Strength, Not Fear’ to Iranian Threat Next: US Blacklists Notorious Iran-Backed Iraqi Militia With US Blood on its Hands →