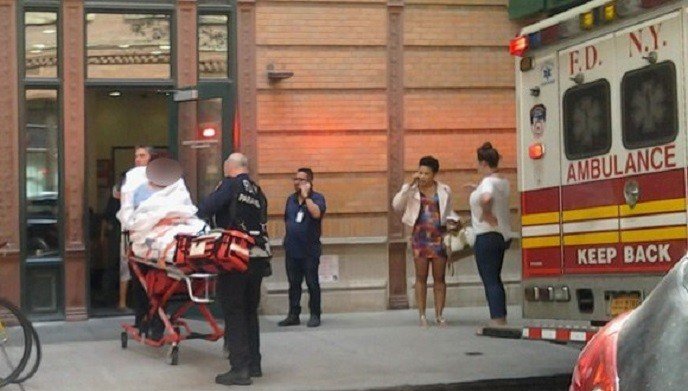 The incident took place on August 1, 2019, at approximately 11:45 a.m. In the past few months, two ambulances have responded to calls for emergency assistance, but this day, only one ambulance from the New York Fire Department responded.

About ten minutes after the ambulance crew entered the Planned Parenthood abortion facility, they emerged with a young Black woman in the seated position on a gurney. She was loaded into the ambulance and transported presumably to a nearby hospital.

A pro-life activist on the scene at the time photographed the incident and later told Operation Rescue that the ambulance only turned on sirens after it was about a block away from the Margaret Sanger Planned Parenthood building.

It was ironic — but not unusual — for a Black woman to have been injured at this abortion facility named after Planned Parenthood founder Margaret Sanger.  Sanger was a well-known racist and eugenicist who advocated for the extermination of Blacks and called for a “race of thoroughbreds.”

“The Margaret Sanger Planned Parenthood is in an area that allows them to target poor urban women of color.  The number of women injured at this facility is shocking.  It should be closed down immediately in the interest of public safety, but in New York, that is not likely to happen any time soon – barring an act of God,” said Troy Newman, President of Operation Rescue.

In January, New York passed a law that liberalized abortion to include pre-born babies up until birth.  It also removed several provisions that provided accountability for abortion businesses and protections for women.

Information about other medical emergencies at the Margaret Sanger Planned Parenthood in New York is available at the following links: