Pastor Opens Legislative Session With Prayer Against Abortion, So Democrats Walked Out 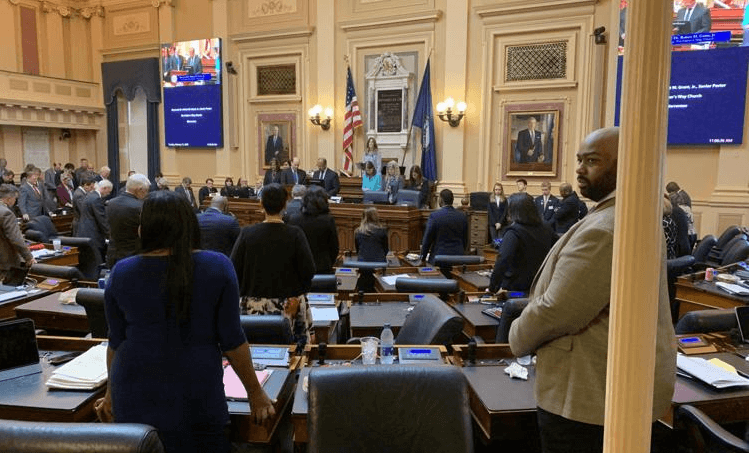 Virginia House Democrats walked out of the legislature Tuesday when a pastor confronted them about their support for killing unborn babies.

The Virginia Mercury reports the Rev. Dr. Robert M. Grant Jr.’s opening prayer for the state legislature condemned abortion and warned about God’s “wrath” if abortion activists do not repent.

Grant, a pastor who serves The Father’s Way Church in Warrenton and runs a charity to help orphans in Africa, received the invitation to pray from pro-life Del. Dave LaRock, R-Loudoun, according to the report.

The local news did not provide direct quotes from Grant’s prayer, but he apparently was cut short after Democrats began to walk out. One lawmaker even interrupted Grant, yelling, “Is this a prayer or a sermon?” according to the local news.

Two pro-abortion Democrat lawmakers had a different point of view. According to the report:

Del. Delores McQuinn, D-Richmond, a pastor, said most prayers are delivered as blessings for legislators and the work they’re undertaking.

“In many ways it felt like condemnation,” McQuinn said of Tuesday’s prayer.

“Most of the clergy that come here have been very respectful of the opportunity extended to them,” [Del. Luke Torian, D-Prince William, who is a pastor] said. “And every now and then you get someone that goes off the rail.”

But pro-life Christians may very well ask how a pastor could pray to “bless” state lawmakers who are working aggressively to end all rights and protections for babies before birth. Since taking over the Virginia legislature in January, pro-abortion Democrats have been pushing a number of radical pro-abortion bills that would strip away protections for both women and children.

Two weeks ago, the Virginia House passed a bill to repeal common-sense abortion restrictions, including a requirement that doctors perform abortions and another that ensure women are fully informed prior to going through with the abortion. Other legislation making its way through the legislature would repeal the state parental consent requirement for minors seeking abortions, National Review reports.

Christianity condemns abortion because it destroys the life of an innocent, unborn child who is created in the image of God. It also teaches that Christians must stand up and defend the most vulnerable in society, especially women and children. ← Prev: Couple Tried to Abort Their Late-Term Baby, Left Him to Die When He Was Born Alive Next: Democrats Oppose Bill to Stop Infanticide and Care for Babies Born Alive After Abortions →