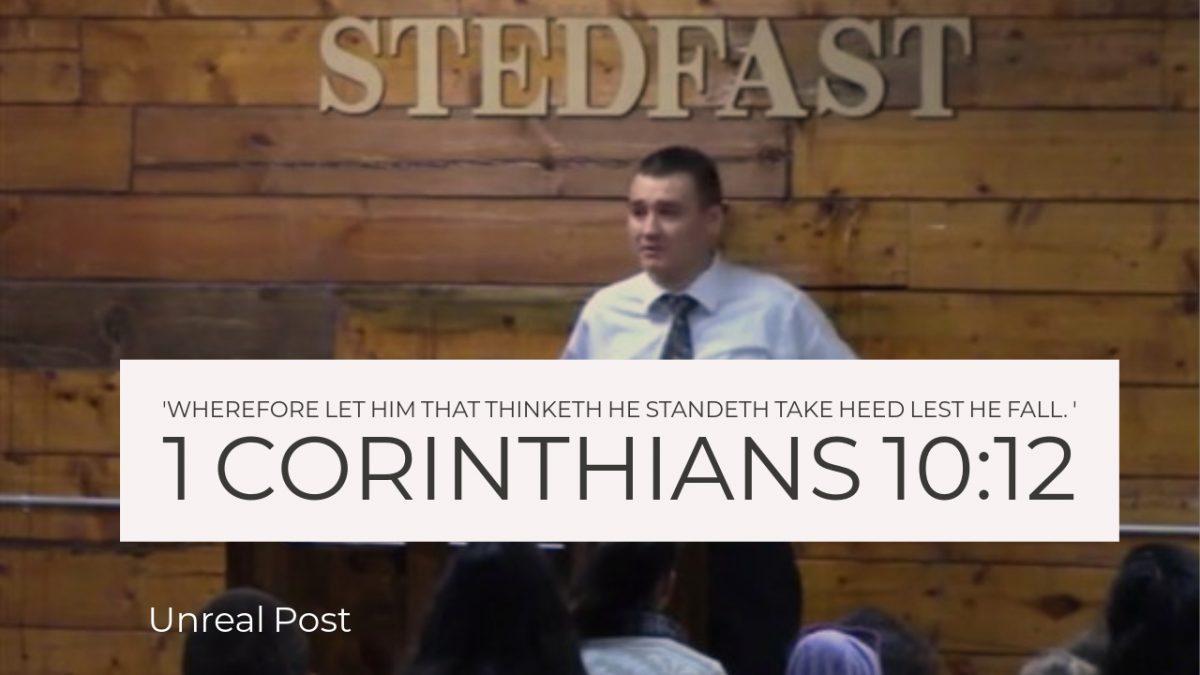 Therefore let him who thinks he stands take heed lest he fall.

Pastor Donnie Romero of Stedfast Baptist Church has been ousted from his Fort Worth church for “sleeping with prostitutes,” marijuana possession and gambling, according to Pastor Stephen Anderson who recommended Romero for the job.

Romero is best known for his very unchristian-like and abhorrent comments below.

“These 50 sodomites are all perverts and pedophiles, and they are the scum of the earth, and the earth is a little better place now,” Romero said. “And I’ll even take it a step further ’cause I heard on the news today that there are still several dozen of these [bleeped out] in ICU, in intensive care, and I will pray to God like I did this morning—I will do it again tonight—I will pray that God will finish the job that man started.”

When I first heard these comments I wasn’t shocked at all, Pastors of his ilk are a dime a dozen and all follow their mentor Pastor Stephen Anderson, of Tempe, Arizona. Pastor Stephen Anderson who recommended Romero for this position, is known for his fiery, confrontational and aggressive preaching. Anderson has influenced many men to start their own Churches spewing the same garbage theology.

Pastor Stephen Anderson believes that the world could be rid of AIDS if all homosexuals were killed. Then went on the local news station here in Arizona defending his ignorant statements.

So Self Righteous No Earthly Good

On Wednesday, Romero addressed the Stedfast congregation and said he was leaving the church. The announcement was posted on the church’s YouTube channel.

“I have not been ruling my house well. I have been a terrible husband and father,” Romero said tearfully in the announcement.

“I’m the one at fault in this situation. I love Stedfast Baptist Church. I love my family. This is the best decision for my family and this church to make.”

Pastors make mistakes all the time this isn’t something new. This is making National News because of his abhorrent comments just after 50 people were brutally murdered by a terrorist.

There is no scripture support for what he said. I knew it but the millions that heard his comments that are not familiar with the grace of God. More than likely said look at those self righteous Christians! Again, the comments Romero made regarding the horrifying Orlando Shooting were not Biblical.

God sent His only Son Jesus Christ to die for the sin of the world.

The next day John saw Jesus coming toward him, and said, “Behold! The Lamb of God who takes away the sin of the world!

The entire Bible is about God and His plan to redeem the world back to Himself through His Son Jesus Christ. Because of one man’s disobedience (Adam), Sin entered the world and separated man from God because God is Holy.

Therefore, just as through one man sin entered the world, and death through sin, and thus death spread to all men, because all sinned.

But here’s the grace message that is the antithesis of what Romero stated.

‘But the free gift is not like the offense. For if by the one man’s offense many died, much more the grace of God and the gift by the grace of the one Man, Jesus Christ, abounded to many. ‘

The Good News is Salvation is Free

To appropriate the free gift all God asks is that mankind believes by faith alone the gospel. Which is that because of sin God sent His only Son Jesus Christ, to die for your sins, was buried and rose from the dead three days later. (1 Corinthians 15:1-4)

for all have sinned and fall short of the glory of God,

For the wages of sin is death, but the gift of God is eternal life in Christ Jesus our Lord.

For by grace you have been saved through faith, and that not of yourselves; it is the gift of God, not of works, lest anyone should boast.

that if you confess with your mouth the Lord Jesus and believe in your heart that God has raised Him from the dead, you will be saved.

For with the heart one believes unto righteousness, and with the mouth confession is made unto salvation.

The flip side is mankind’s unbelief or rejecting God’s grace will lead to eternal destruction in the lake of fire separted from God.

In flaming fire taking vengeance on them that know not God, and that obey not the gospel of our Lord Jesus Christ:

Who shall be punished with everlasting destruction from the presence of the Lord, and from the glory of his power;

Salvation is a choice. God is not forcing anyone to do anything. The gospel of the grace of God has been available to mankind for 2000 years. So when judgement comes no one will be able to say I didn’t know.

To declare, I say, at this time His Righteousness: that He might be Just, and the Justifier of him which believeth in Jesus.