Over 1,000 Pro-Life People Rally Against Infanticide at Virginia State Capitol 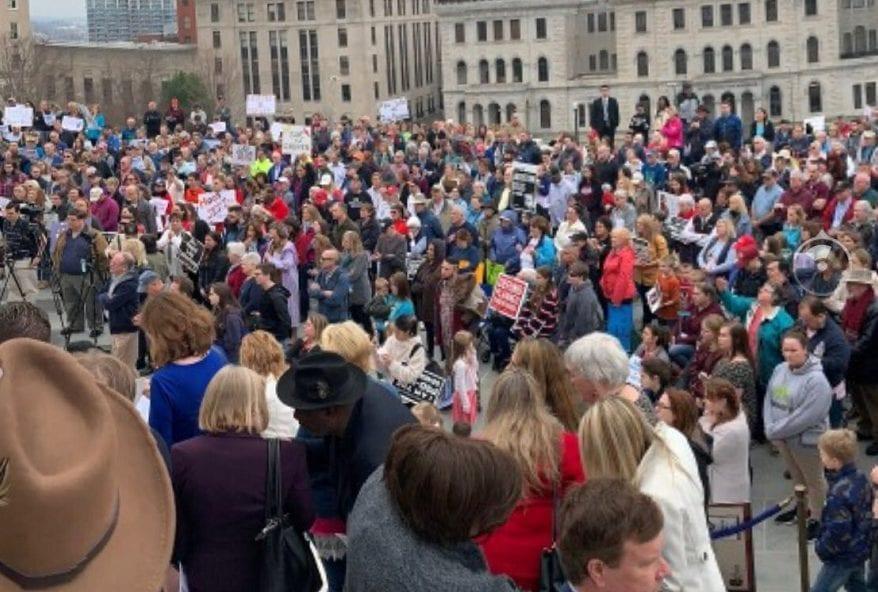 Nearly a thousand pro-lifers rallied Thursday in Richmond, Virginia against new political assaults on the lives of unborn babies.

Virginia lawmakers gathered with pro-life voters, students and other concerned residents to oppose radical pro-abortion legislation being pushed in states all across the country. The Right to Life rally took place outside the Virginia State Capitol.

A recent Virginia bill would have allowed abortions through all nine months of pregnancy, including while a mother is in labor – even if there is no physical threat to her health. The bill was defeated in committee last week, but the outrage against Gov. Ralph Northam, its sponsor Del. Kathy Tran and others for supporting the killing of unborn babies continues.

Many mourned the recently passed New York law that allows unborn babies to be aborted for basically any reason up to birth, as well as similar bills to expand late-term abortions in New Mexico, Vermont, Rhode Island and Massachusetts.

“Richmond will never be lit up in pink,” said Victoria Cobb, president of The Family Foundation of Virginia, referring to New York Gov. Andrew Cuomo’s celebration of his new pro-abortion law.

Reagan Barklage of Students for Life of America urged Americans to resist the growing push for abortion and infanticide. She said a baby’s age, born or unborn, should not matter; every human life deserves protection.

State Sen. Amanda Chase, R-Chesterfield, and Sen. Bill Stanley, R-Franklin, were among the lawmakers who participated in the rally for the unborn, according to the Times-Dispatch. Other participants included women with the Silent No More Awareness campaign who spoke publicly about how deeply they regret aborting their unborn babies.

Virginia Society for Human Life estimated that there were almost 1,000 pro-lifers in the crowd.

Great to see many pro life Virginians march on Richmond today in response to Governor Northam’s comments about late term abortion and infanticide. We must stand tall for life, for we are the pro life generation! #prolife #VirginiaGovernor #MarchForLife #SaveTheBabies #virginia pic.twitter.com/UUEg0VU9Yu

Rally here in Richmond for the life of every child. pic.twitter.com/IDgkslm5C8

Outside the General Assembly in #Richmond this morning for a #prolife rally! pic.twitter.com/jQiDPvmtQ5 ← Prev: Andrew Cuomo: Don’t Criticize Me for Abortions Up to Birth Because “I Was an Altar Boy” Next: Aborted Baby Parts Are Being Infused With Mice in Shocking Experiments →