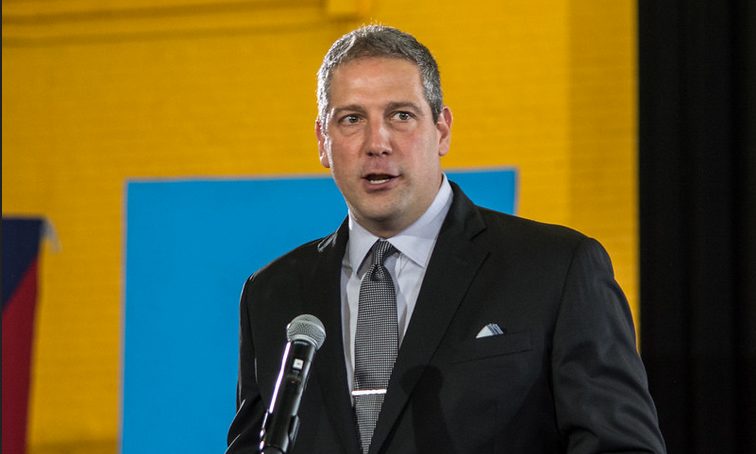 Ohio Congressman Tim Ryan, a Catholic who flip-flopped from pro-life to pro-abortion, has announced he is running for president.

Ryan, who ran for House minority leader in 2017 and floated the idea of mounting an intra-caucus bid against Nancy Pelosi for the House speakership, announced in a campaign video released on his website that he would be throwing his name into the already-crowded Democratic field for president.

“As a congressman from Youngstown, Ohio for almost 20 years, I’ve watched the American Dream slip through the fingers of many Americans,” Ryan says on the website. “That’s why I am running for president. It’s time to do something.”

Ryan, 45, was first elected to Congress in 2002 and has been a long-term fixture in the House Appropriations Committee. As a lawmaker from Ohio’s automobile manufacturer region, Ryan has free trade and taking on China a central theme of his congressional career. The Ohio lawmaker was widely seen as one of the instrumental people in delivering House Democrats their congressional majority in 2018, actively campaigning and fundraising for competitive seats throughout the Midwest and beyond that ended in wins for his party.

“A quiet revolution is happening in this country. One that is driven by compassion and the independent spirit our nation is known for,” he said. It’s time for us to invest in our values so we can focus on what really matters: healing and uniting our nation.”

Ryan’s sense of compassion apparently oesn’t extend to unborn babies — or even babies who survive failed abortions. While three Democrats have signed the Republican discharge petition to force Nancy Pelosi to allow a vote on the Born Alive bill to stop infanticide, Ryan is not one of them.

There was once a time with Ohio congressman Tim Ryan was considered a rising star within pro-life circles. A rare pro-life Democrat and from the crucial battleground state of Ohio, Ryan was embraced by Right to Life groups and by Democrats for Life of America. Ryan worked with the national organization for pro-life Democrats and eventually became a national advisory board member and a sponsor of its key legislative component.

However, as LifeNews.com has chronicled, Ryan increasingly backed away from the pro-life position and gone as far as attacking pro-life groups in public.

Since 2009, Ryan hasn’t cast a single pro-life vote and has a 0% pro-life voting record with the National Right to Life Committee. Even before then, his “pro-life” voting record was spotty and included votes for abortion funding in some cases.

Now, despite ignoring the millions of women who profoundly regret their abortions, Ryan says women’s stories converted him to the pro-abortion position.

Ryan wrote about his decision to back abortion:

I have sat with women from Ohio and across the nation and heard them talk about their varying experiences: abusive relationships, financial hardship, health scares, rape and incest. There are endless stories about women in troubling situations — the woman who became pregnant and has a violent spouse; the woman who lost her job and is unable to afford another child; or the underage girl worried she’ll be thrown out of her house if she reveals her pregnancy.

These are just a few of the many stories I have heard. Each of these women lived through difficult and personal situations with few options and no clear path to take. This is why there is no easy answer.

These women gave me a better understanding of how complex and difficult certain situations can become. And while there are people of good conscience on both sides of this argument, one thing has become abundantly clear to me: the heavy hand of government must not make this decision for women and families.

“Congressman Ryan’s flip-flop on abortion clearly demonstrates his opportunistic and self centered approach in seeking higher office.  By callously and carelessly tossing aside his so-called strong Catholic upbringing and pro-life beliefs to now support abortion, sadly proves yet again that politicians will say anything and do anything to get elected or climb the political ladder.  It is no wonder why Congress has the lowest approval rating in our nation’s history,” he said.

He continued: “Of course, Ryan was proudly “pro-life” while easily getting re-elected in an otherwise gerrymandered district.  But now as he seeks higher office, which we assume will be a challenge to pro-life Senator Rob Portman, he chooses to abandon those who helped him get elected in the first place.  Most alarming to all Ohioans, both pro-life and pro-choice, is that if he is willing to easily flip-flop on the fundamental issue of a baby’s life, what would he do with every other issue which faces our nation.”

Gonidakis said: “Congressman Ryan’s so-called conversion should be a wake-up call to voters in his current district as well as the rest of Ohio that he is nothing more than a political opportunist who will say anything to get elected.  Thankfully Ohioans have rejected this type of politics and Congressman Ryan, I suspect, will soon learn of these consequences if he chooses to run for the US Senate.”

When he took Democrat’s for Life’s legislation, the Pregnant Women Support Act, and compromised it by including taxpayer funding for the nation’s largest abortion business, Planned Parenthood, that was the last straw for the organization.

“DFLA gave Congressman Ryan ample opportunities to prove he’s committed to protecting life, but he has turned his back on the community at every turn,” Kristen Day, the group’s executive director, says.

And now he’s running against the president who some pro-life advocates say has done more for the pro-life cause than any other. ← Prev: Hypocritical Host of “The View” Celebrates “Baby Shower” After Years of Meltdowns Over Abortion Next: My Birthmom Experienced the Horror of Rape and Some People Say I Should Have Been Aborted →