No Dogs Please: It Offends the Muslims Thank you 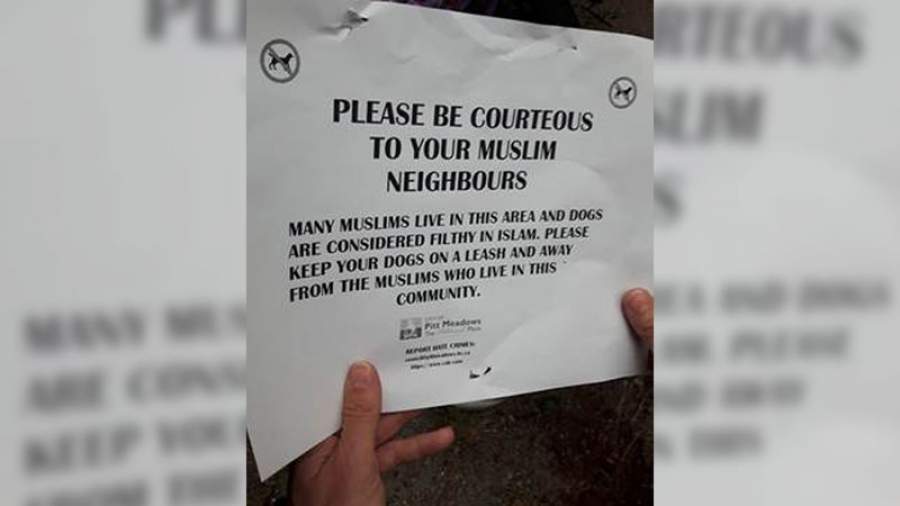 CTV of Vancouver reports: A number of flyers were recently posted in Hoffman Park asking dog owners to keep their pets leashed.

“Many Muslims live in this area and dogs are considered filthy in Islam. Please keep your dogs on a leash and away from the Muslims who live in this community,” the flyers read.

It’s not clear who posted the signs in the community, but several were brought to city hall by area residents because they include the city logo and the email address for city council.

Mayor John Becker says the notices were not produced by the city, and he does not endorse them.

“Whether they were produced by a well-meaning member of the Muslim community or by someone wanting to cause contention, the fact remains that there are current bylaws in place that enforce areas for dogs to be on leash, except in designated off-leash areas,” Becker said in a statement sent to CTV Vancouver.

Nor is Canada some weird, hyper-polite anomaly. Muslim politicians in the Netherlands have tried to ban dogs from The Hague. In Spain, local politicians rejected such a ban. An epidemic of dog-poisonings happened shortly after. As the Gatestone Institute reports:

In Britain, which has become “ground zero” for Europe’s canine controversies, blind passengers are being ordered off buses or refused taxi rides because Muslim drivers or passengers object to their “unclean” guide dogs.

Click here to view the original web page at stream.org