No Christian Couplets for Spring Festival 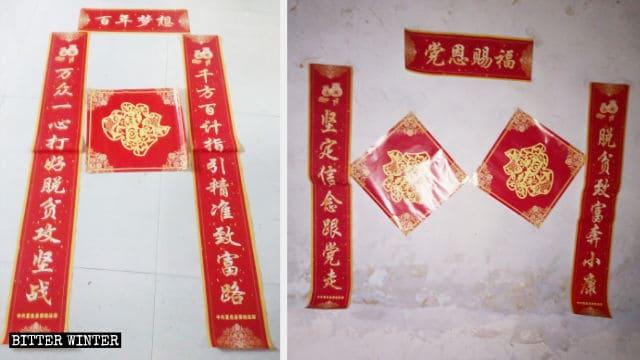 Henan authorities are forcibly taking down religious symbols in individuals’ homes and forcing them to advertise CCP ideology.

In China, the New Year has brought nothing new: The Chinese Communist Party is still enforcing political propaganda on believers, even going so far as to insist that Party-worshiping couplets are hung in their private residences. Chinese couplets – a form of Chinese poetry – is a tradition spanning generations when people write their wishes, often on red paper, and hang them on the gates of their homes. Spring Festival couplets are the most common and traditional form to celebrate the Chinese New Year.

“It is forbidden by the state that religious sites provide religious individuals with New Year couplets with religious characteristics,” the director of Bureau of Religious Affairs in Xiayi county of the prefecture-level city of Shangqiu, in China’s Central Henan Province, said during a meeting a church held for religious individuals on December 3, 2018.

The leadership of the county’s China Christian Council and the Three-Self Patriotic Movement emphasized that Christmas and New Year couplets would be uniformly distributed by the Bureau of Religious Affairs this year and warned Christians that they wouldn’t be allowed to put up couplets with religious content, or else.

True to their word, on Christmas Day, Christians from multiple churches in Xiayi county received New Year couplets uniformly provided by the government.

When they unraveled the couplets, they found phrases eulogizing the Party written on them, like: “Blessings of the Party,” and “Have staunch faith and follow the Party; rise from poverty and head for prosperity.”

“God gives blessings,” one Christian said. “We follow God. It is truly shameless of the CCP to want us to follow the Party.”

Another Christian categorically refused to put up the Party propaganda, saying, “The government is interfering with our religious freedoms.”

At the end of January 2019, churches in the cities of Shangqiu and Yongcheng also received from the government New Year couplets praising the Communist Party.

Personnel from a sub-district office in the Economic and Technological Development Zone of Zhengzhou city gave one church 600 pairs of couplets and ordered that the Christians hang them up for the New Year, saying: “It’s the same for the whole province; the government is uniformly providing couplets for the churches this year, and the symbols of crosses aren’t allowed.”

“The government’s persecution targeted at religion is becoming increasingly severe, and we are not allowed to say anything about it,” one church pastor from Yongcheng city said. “If anyone says anything bad about the Communist Party, they will immediately be arrested and put in prison upon being discovered.”

But the CCP’s home invasion doesn’t end there. On top of forcing Christians to hang CCP-related couplets in their own homes, authorities are also making them put up New Year couplets with images of door-gods –Chinese folk religion deities that are traditionally put up on doors for the Chinese New Year.

On January 8, 2019, two officials from the Bureau of Religious Affairs of Ruzhou city handed 350 pairs of couplets with images of door-gods to the leader of a Three-Self church. He refused to accept them, but the officials said: “You have to take them whether you want them or not.”

“We’d prefer not to put anything up at all rather than put up couplets with idolatry,” one Christian said indignantly.

Government officials clearly have no concern for the Christians’ protests, and they forced two Christian women to take the couplets, and then took pictures of them with their phones.

On December 26, a village official took two cleaning workers to Christians’ houses one after another to put up secular New Year couplets, greatly upsetting the Christians.

“This is an order from higher authorities. They’re just afraid you’ll put up Christian New Year couplets for the Spring Festival, so they’re having these put up in advance,” the village official said.

← Prev: Christian Mother Facing False Accusation in India Is Transferred Far from Home, Sources Say Next: Chinese State Will Photograph You in Your Own Home →