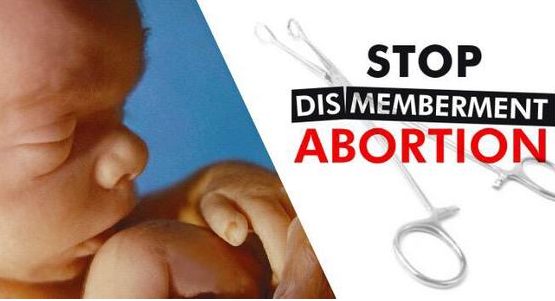 U.S. Sens. Mike Rounds (R-S.D.) and James Lankford (R-Okla.) today introduced the Dismemberment Abortion Ban Act of 2019. This legislation would prohibit physicians from performing dismemberment abortions. It would impose a criminal fine, up to two years in prison, or both for individuals who perform this type of abortion.

“Dismemberment abortions are among the most brutal methods of abortion, and they account for roughly 90 percent of second trimester abortions,” said Rounds. “Unborn children can feel pain during this stage of the pregnancy, starting at 20 weeks. It is unconscionable to legally allow physicians to dismember unborn children, some of whom are able to feel pain. We have a responsibility to defend the dignity of all life, from conception to natural death. I thank Sen. Lankford for his leadership on this issue over the years, and I’m happy to partner with him this Congress to advance our legislation that would make dismemberment abortions illegal.”

“Oklahomans and our nation are divided on the issue of when life begins, but most Oklahomans know by now that I believe life begins at conception and that I believe each child in the womb is created in the image of God and has value and worth,” said Lankford. “Despite our differences on the issue of life, because of technological advancements, we clearly know now that pre-born children feel pain. Surely we can all agree that dismantling a child in the womb during a late-term abortion is inhumane and is not reflective of American values. I am once again proud to sponsor this legislation that stands firmly against this tragic practice, and I remain committed to ensuring we respect the lives of mothers but also the lives of children in the womb.”

A dismemberment abortion, also called a “dilation and evacuation” abortion, is the most commonly used abortion method in second trimester abortions (week 13 to week 28 of pregnancy). In a dismemberment abortion, a living unborn child is dismembered and extracted, one piece at a time. The child can also remain intact until he or she is crushed through the use of clamps, grasping forceps, tongs, scissors or other similar instruments.

← Prev: She Spent Years Trying to Find Her Birth Mom, Then She Learned She Was Saved From Abortion Next: He Was Born Blind at 26 Weeks and Could Have Been Left to Die, Now He’s Telling Democrats to Stop Infanticide →