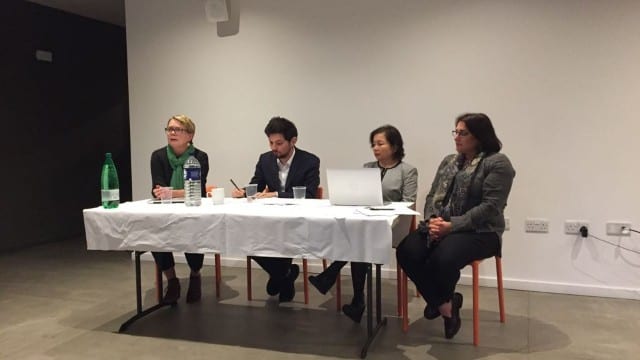 Seventy years ago, “never again” was the response to the horrors of the Holocaust, but genocide keeps happening. There are worrying signs that it may happen again in the far West of China.

Jews stood alongside Uyghur Muslims last week in London to declare “Never Again,” and to raise awareness of the horrors unfolding in China’s Xinjiang Province.

Members of the René Cassin Organization, the Jewish voice for human rights in the UK, gathered for an event to commemorate the 70th anniversary of the Universal Declaration of Human Rights in solidarity with Uyghurs who are facing a similar horror.

Commenting that “never again”  has in fact come to mean “time and time again,” René Cassin’s director, Mia Hasenson-Gross, introduced the evening by telling the audience that the Uyghur incarcerations, now up to 1.5 million, were in fact the tenth such “genocide” since World War II.

The organization. which was set up to implement the values of its name sake, Jewish lawyer René Cassin (1887–1976), who helped draft the Universal Declaration of Human Rights (UDHR), and to stand up for those with no voice in the world, is a charity working to promote and protect universal human rights, drawing on Jewish experience and values.

Quoting a René Cassin blogger, Baruch Solomon, Ms. Hasenson-Gross  said that the UDHR was a remarkable document, but a hollow one “if China, home to a sixth of the world’s population and at the heart of the community of nations, is making a complete mockery of the Declaration.” “If the Seventieth Anniversary of the Declaration is to mean anything,” she added, “it must remind us that, as human rights activists, we have a part to play in holding governments and institutions to account and a duty to ensure that they abide by the Declaration’s principles.” She urged the audience that Jews had a special responsibility not to remain silent in the face of arbitrary arrests and secret deportations. “We may be limited in what we can do as individuals, but we are all capable of raising awareness on the issue. Any action, however small, will demonstrate that we have not forgotten our own past,” she urged.

Barrister Amy Woolfson, whose concern for Uyghurs in China began to grow when the atrocities started coming to light last year, quoting William Wilberforce(1759–1833), said: “We may choose to look the other way, but we can’t say we didn’t know.”

Writing in an article for the Jewish News, she had earlier reminded her audience that Jewish people don’t need to be warned about genocide. “We know it doesn’t happen overnight,” she said. “We know it starts with a culture being demonized, and with hate and repression becoming normal. Then people start disappearing. That’s what is happening today in China.” She urged the Jewish community not to remain silent. “As Jews, I believe we have a special responsibility to bear witness to what is happening, and to speak up whenever we can.”

Dr. Rachel Harris, Research Coordinator of the School of Arts at SOAS (School of Oriental and African Studies), University of London, spoke of her horror at confirmation last week that 15 major religious sites, including significant mosques, had been completely or almost completely razed, in particular the Imam Asim Mosque on the outskirts of Hotan, which has now disappeared. “Pilgrims used to come from all over the province to this site,” she said. “This is just a brutal targeting of Uyghur holy sites.”

Rahima Mahmut, a London-based singer, translator, human rights activist, and public speaker, whose entire family in Xinjiang have severed all ties with her for fear of reprisals, spoke of the unfolding tragedy for members of the Uyghur diaspora who have been cut off from their homeland and relatives. She spoke of “unbearable pain” in her work as a translator after hearing story after story of heartbreak. She said that her efforts and her compulsion to get the story out have caused her untold suffering.

Rabbi Benji Stanley, Rabbi of Westminster Independent Synagogue, in the centre of London, said that a Jewish response to suffering should be to care for society’s most defenseless. Using the Bible’s Deuteronomy 25, verses 17–19, as his text, he pointed out that it was the task of the Jewish community to remember the evil acts that were perpetrated against them and to make sure this would not happen to other vulnerable groups. Taking the example of the Jews who were picked off by the enemy during their long march out of Egypt, he said that people were most in danger when they took their eyes off God and gave into apathy. He urged Jews not to become indifferent. “We must never be apathetic to the plight of the most vulnerable and needy,” he said, adding, “we decay when we are unmoved by their suffering.” He urged the audience to remember that they too were strangers in a strange land. He pleaded with them not to allow the “drip , drip, drip of awful news,” to narrow them into apathy and inaction. ‘Don’t forget that the injunction not to oppress the stranger, appears 40 times in the Bible,” he said. “It is also easy to remember your own suffering, but not to remember the suffering of others.”

The audience was urged to write to MPs, write to the British Foreign Office directly, keep pressure on the British Government, lobby Amnesty International and other human rights groups, and to stand together with the Uyghur in their suffering.

‘We have a responsibility to challenge the spiritual leadership to come together to tackle this dilemma,” concluded Mia Hasenson-Gross. She asked: “Where is the legacy of the Declaration of 70 years ago that we are still not delivering on?” Only a few weeks ago at Passover, she said that Jews were reminded they were once slaves but now they are free.

“Let’s extend that freedom to others,” she pleaded.