Netflix Show “Another Life” Has a Sick Euphemism for Abortion: “Restoring Your Period” 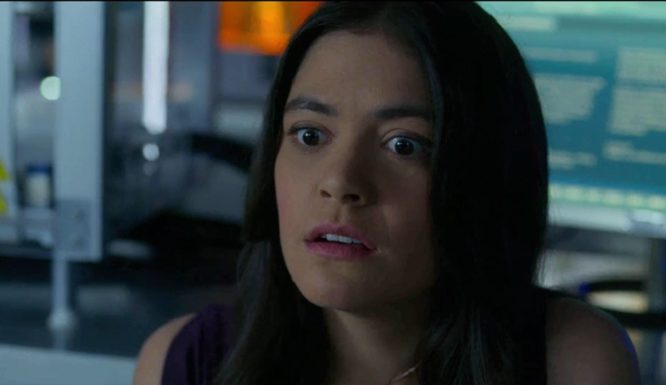 In Netflix’s Another Life, released July 25, just about everything that can go wrong on the mission does. Including an unintended pregnancy, which the show uses as a chance to push abortion, through euphemisms, of course, in its season finale.

Sometime in the future, an alien artifact has landed on Earth. A crew, led by Niko Brekinridge (Katee Sackhoff) has been sent aboard the Salvare to investigate why the aliens have come. With crew members living in such close quarters to one another on a spaceship, there’s bound to be some sexual tension. The chemistry between August (Blu Hunt), Oliver (Alex Ozerov), and Javier (Alexander Eling) is particularly palpable.

Transgender medic, Zayn (JayR Tinaco, who goes by the pronouns ze/hir), notices August has had a particularly heightened sense of smell. Not only does Zayn deduce she is pregnant by testing her, but Zayn tells August abortion is an option, through quite the euphemism:

Zayn: August? August. I’m ready. [administers pregnancy test] Okay, open up. We’ll be done before you know it. Okay. This probably isn’t what you wanted to hear, but you are pregnant. It’s still very early days, and there are simple, non-invasive ways to restore your periods, if that’s what you want.

August: What I want?

Zayn: Think about it. Consult with the father, if you’d like, but ultimately this is your choice, okay?

What, exactly, goes into these “simple, non-invasive ways to restore your periods?” Viewers are not made aware, though it would seem in the future abortion is not only still practiced, but also still dressed up in euphemisms.

One of the potential fathers, Javier, also eludes to August having an abortion. He thinks he’s being helpful, but is really dehumanizing the life inside of her, a life which he may have helped create.

Javier: Oh. Did you?

August. I’m serious. I’m pregnant, and one of you is the dad. I don’t know what to do, or what-what can we do?

Javier: Uh, you don’t have to keep it if-if you don’t want to.

August: I know I don’t. But is that right, after so many people have died?

Oliver: Yeah, but William said that… I mean, the radiation–

August is at least open to having an abortion, and her reasoning why she wouldn’t have one is something else – an odd way to commemorate the five crew members who have died, some of them through pretty gruesome means.

We also don’t know by episode’s end, which is the last in the season, if August has the abortion or keeps her baby. Perhaps the show was hoping to keep it as a cliffhanger while looking forward to a season 2. With the show’s dismal reviews (a 7% on Rotten Tomatoes and 4.5/10 on IMDb), viewers might never find out if the show gets aborted.