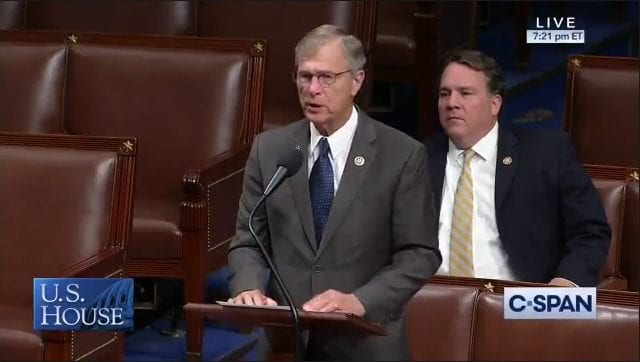 House Democrats refused a vote on the bill for the 68th time — reading the same statement they have read the previous 67 occasions that claims there is no bipartisan agreement to bring the bill up for a vote. Despite the claim, Republican leaders have repeatedly asked Pelosi and top Democrats to reach an agreement for the bill to receive a vote.

This is the 70th time in total that Congressional Democrats thwarted an attempt by Republicans to vote on a bill that would provide medical care and treatment for babies who provide survived failed abortions — 68 times in the House and twice in the Senate.

Rep. Brian Babin (R-TX) offered a unanimous consent request to allow a vote on the anti-infanticide bill but Democrats ruled it out of order. As they have done numerous times, after Democrats denied the request to vote on the bill, they cut off his microphone so he could not object to their denying a vote.

Afterwards, Congressman Babin tweeted about the denial, “Tonight, I called for @SpeakerPelosi to bring #bornaliveact to the floor for a vote – and for the 68th time she has declined. It’s horrific to refuse medical care to babies who’ve survived attempted abortions. We MUST protect those who cannot defend themselves.”

The denial comes just weeks after Democrats voted to fund infanticide. LHHS Ranking Member Tom Cole (R-OK) offered an amendment to withhold funds to any medical entity that does not ensure that any infant born alive following an abortion receives the same medical care as any other infant born at the same gestational age. Every Republican voted for the pro-life amendment to stop infanticide while every Democrat on the committee, except Texas Democrat Henry Cuellar, voted for infanticide.

In April, Republican Whip Steve Scalise and Representative Ann Wagner moved forward with a discharge petition to force Speaker Pelosi to schedule a vote. That’s a petition any member of Congress can sign to allow legislation to move out of committee and to the House floor when the party controlling Congress refuses to allow a vote on it.

So far, 201 members have signed on, including three Democrats — short of the majority necessary to get the bill to the floor for a vote.

Rep. Cathy McMorris Rodgers, a leading House member, discussed the discharge petition in a recent interview with the Daily Signal.

H.R. 962, the Born Alive Abortion Survivors Protection Act, introduced by Rep. Ann Wagner (R-MO), ensures that a baby born alive after a failed or attempted abortion receives the same medical care as any other newborn. It would also penalize doctors who allow such infants to die or who intentionally kill a newborn following a failed abortion.