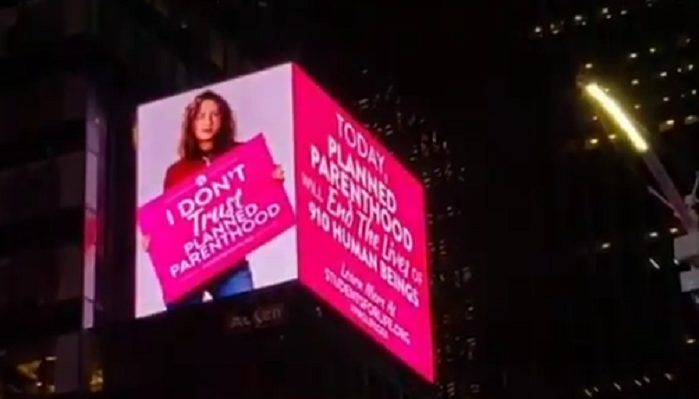 “Our billboard is set to run on a 50-foot-tall HD video screen in one of the busiest locations on the planet. Over three days, the 15-second video ad will run a minimum of 720 times and be seen by tens – if not hundreds – of thousands of people,” Hawkins explained.

Students for Life of America is sponsoring a massive 50-foot-tall video billboard in Times Square this week with a message that takes on abortion and Planned Parenthood. The billboard is timed to run for three days during SFLA’s National Gala in the Big Apple tonight. “When I asked our supporters if they wanted to send a pro-life message in Times Square, the answer was a resounding YES,” said SFLA President Kristan Hawkins. She told LifeNews: “We had to fight to have our message heard as twice companies pulled the plug on our custom-made ad after intensive negotiations. But we don’t give up on college campuses, even when facing threats of violence, and we didn’t give up on sending a message to the vast majority of New Yorkers who reject infanticide and are horrified by the abortion extremism recently legalized […]