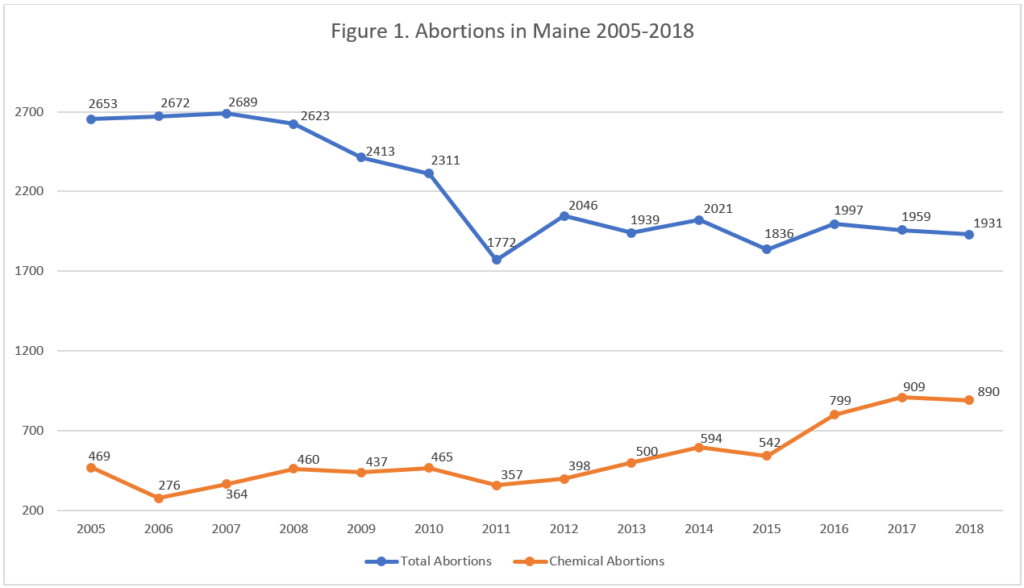 Maine’s abortion report for 2018, published on the website of the Maine Department of Health and Human Services in June 2019, shows that abortions in the state dropped slightly from the previous year.

In 2018, there were 1,931 abortions reported in Maine. Since 1999, Maine abortions have dropped by 20 percent, a difference of nearly 500 abortions. Abortions fell slightly by a little over one percent between 2017 and 2018 (Fig. 1). Chemical abortions dropped by two percent over the same period but have risen by more than 1,200 percent (over 800 abortions) from 2001, the first full year after the U.S. Food and Drug Administration approved the use of mifepristone to induce abortions. Chemical abortions made up 46 percent of the state total in 2018. The Charlotte Lozier Institute estimates that Maine’s abortion rate fell slightly from 2017 to 2018 (Fig. 2).

White women made up a large majority of the women obtaining abortions in Maine. Eighty-five percent of Maine abortions were performed on white women, compared to five percent on black women, three percent on American Indian women, and six percent on women of other, unspecified races. Just one abortion was reported to have been performed on a woman of Asian heritage, while two percent were performed on women of unknown race. The black abortion rate was more than twice the white abortion rate in 2018: CLI estimates that there were 18.0 abortions per 1,000 black women of reproductive age, compared to 7.5 abortions per 1,000 white women of reproductive age.

In June 2019, Maine amended its abortion law to allow non-physicians to perform abortions. Under the new legislation, there are no restrictions on the types of abortion procedures that physicians’ assistants and nurse practitioners are permitted to perform, even though the American Association of Pro-Life Obstetricians and Gynecologists cautions that permitting non-physicians to perform abortions can put women at risk. The new law may dramatically increase the number of abortion centers in Maine. Maine does not require health professionals to report complications caused by abortion, which means that any adverse effects of the new law will go largely undetected.

In the Charlotte Lozier Institute’s 2016 study of abortion reporting across the country, Maine’s reporting tied for 36th best. Maine law limits the state to collecting only the information on the U.S. Standard Report of Induced Termination of Pregnancy, underscoring the need for a better U.S. abortion reporting system. Even within the limitations imposed by state law, however, Maine could report all the data points it currently collects, including information on the facilities where abortions take place, the level of education of women who get abortions, and the county of residence and occurrence.

LifeNews Note: Charlotte Lozier Institute is an educational and research arm of the Susan B. Anthony List.