Furious Pastor in Canada Shouts Police from His Worship Service ‘Get Out You Nazis’ “Gestapo Not Allowed Here!’ 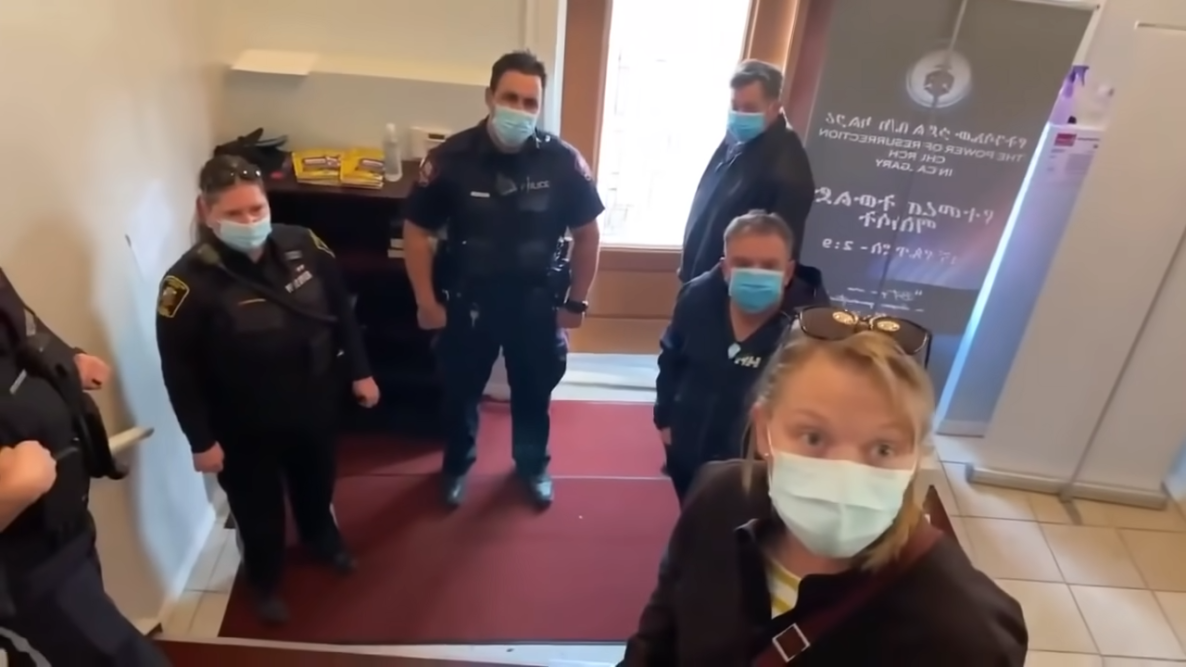 Furious Pastor in Alberta, Canada Shouts Police from His Church. Out! Out of this property, you Nazis! Out! Out! Gestapo is not allowed here.

Police came to disrupt a Church gathering! The Gestapo came again to threaten Church parishioners during the Passover Celebration!!! Unbelievable but true.

This is just a pretext to an all-out assault on the body of Christ in areas of the world not seen before… Like “America”. It’s coming, folks… harsh persecution is just around the corner. Unfortunately, the world is becoming more and more bestial toward Christians.

‘Only let your conduct be worthy of the gospel of Christ, so that whether I come and see you or am absent, I may hear of your affairs, that you stand fast in one spirit, with one mind striving together for the faith of the gospel, and not in any way terrified by your adversaries, which is to them a proof of perdition, but to you of salvation, and that from God. For to you it has been granted on behalf of Christ, not only to believe in Him, but also to suffer for His sake, having the same conflict which you saw in me and now hear is in me.’

A good example of believers standing firm in the faith under severe persecution is found in second Thessalonians chapter 1.

“So that we ourselves glory in you (Paul was thrilled to hear back from these little Gentile congregations and how they were standing firm in the faith) in the churches of God for your patience and faith in all your persecutions and tribulations that ye endure:”

Remember who Paul is writing to, Gentiles who just recently came out of abject paganism. And they now walking the life of a believer, and they came under immediate and intense persecution. Not the kind that we may experience once in a while – this was non-stop and severe. Their lives were threatened daily, more than likely lost their means of livelihood, and yet they never departed from the faith. So this is what the apostle Paul is saying in verse four, “So that we ourselves glory in you in the churches of God for your patience and faith in all your persecutions and tribulations that ye endure;”. Next verse…

“Which is a manifest token of the righteous judgment of God, that ye may be counted worthy of the kingdom of God, for which ye also suffer:”

Wow! compare Scripture with Scripture. Come back to Romans 8:18. Look at what the apostle Paul writes to these Gentiles at Rome. Remember this is for us today!

“For I reckon that the sufferings (the kind of sufferings that the Thessalonian believers were going through) of this present time (our sojourn as believers) are not worthy to be compared with the glory which shall be revealed in us.”

This is what we have to focus on, the glory ahead. The opposition we will certainly face in this life, we have to put it in comparison to the glory that will one day be revealed to us. So the apostle Paul says, “you’re counted worthy for the kingdom because you’re suffering for it.” Now verse 6, and this is a little bit of comfort because I imagine that every believer that suffers at the hand of a gross unbeliever, it’s human nature to say, “God aren’t you going to pay them back?” Oh, Yes He will… Read on…

“Seeing it is a righteous thing with God (and remember God can’t do anything that is wrong or unfair. God only knows how to do that which is upright and righteous) to recompense (or payback) tribulation to them that trouble you;”

The people that tormented the Thessalonian believers are no different than the police who threatened and tormented this Pastor in Canada. And don’t think for a second that they’re going to get away with it. Oh, they may in this physical life, but they still must come before the Great White Throne one day, and remember God is righteous and God won’t forget those things. So we can take comfort in that, even though we can’t strike back ourselves we have the promise that God’s going to do it.

(Breitbart) — Police were volubly expelled from a Polish church in Alberta, Canada after disrupting an Easter service, with the pastor denouncing them as “Gestapo Nazi communist fascists” and “psychopaths”. Pastor Artur Pawlowski ordered the six officers who descended on the Cave of Adullam Church out of the property in a video which he uploaded to Facebook, accusing them of “intimidating people in a church during the Passover” and saying “don’t you dare coming back here [sic]”. “Can you imagine, those psychopaths,” Pawloski said to the camera as the officers walked away. “Passover. The holiest Christian festival in a year, and they’re coming to intimidate Christians during the holiest festival — unbelievable!” he exclaimed. “What is wrong with those sick psychopaths?” The pastor had been polite but firm with the half-dozen officers originally, telling them: “Please get out, get out of this property, immediately get out” as they clustered […]

Click here to view the source of this article

← Prev: Local Contractor in Arizona with 40 Years of Experience Creates New Backyard Game Called 'Who Gets Paralyzed First' Next: Texas Rangers, Border Patrol Rescue 6-Month-Old Who Was Dumped in a River by Smugglers →