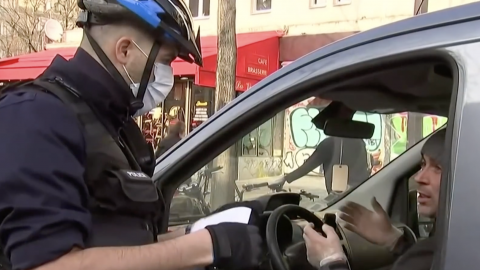 From July of 1940 to September of 1944, the nation of France was ruled by a cadre of politicians and bureaucrats who followed the orders of Nazi Germany. Under the command of Philipe Petaine, who was “granted extraordinary powers” by the National Assembly, the Vichy government locked-down most of the nation (one portion was under Italian occupation), imposing controls over businesses, shutting down newspapers, conducting mass arrests, seizing firearms, and deporting and killing people who either disobeyed or were deemed “problematic”.

And, of course, as it was in Germany, the Vichy authorities imposed a curfew, using the military threat of arrest to force people to stay inside, and demanding, “Papers, PLEASE!” of anyone caught in public. Now, as a “response” to the COVID-19 virus, the French government has imposed a lockdown on private homes and businesses. On Tuesday, President Emmanuel […]

Click here to view the original web page at www.mrctv.org

← Prev: Pro-Choicers Urge Trump to Permit 'Abortion by Mail' during COVID-19 Pandemic Next: ‘To God Be the Glory’: Church in Romania Worships Outside in Midst of Coronavirus Outbreak →