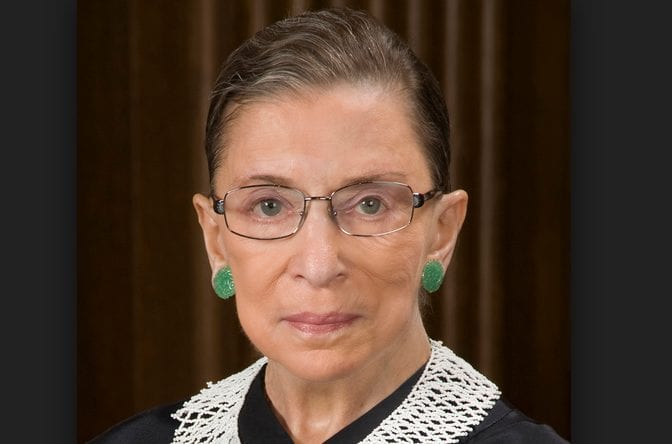 Ginsburg said the Court functions well at the current number of personnel in a wide-ranging conversation with NPR, and panned prior efforts to expand the panel as quixotic.

“Nine seems to be a good number,” the justice said. “It’s been that way for a long time.”

“I think it was a bad idea when President Franklin Roosevelt tried to pack the Court,” Ginsburg said elsewhere in her remarks.

After a landslide reelection in 1936, Roosevelt pushed legislation that would have provided for as many as six new justices. A right-leaning majority on the Court invalidated much of his domestic agenda on constitutional grounds between 1933 and 1937.

Liberal activist energy has proliferated around the courts given the GOP’s steady clip of judicial confirmations under President Donald Trump. Interest groups like Pack the Courts and Demand Justice have raised significant sums pushing court-expansion plans, and lobbied Democratic presidential candidates to take positions on their ideas.

Ginsburg’s comments are a serious blow to those ambitions — she commands cultural cache to an extent most unusual for a Supreme Court justice.

So-called court reform proposals have split the Democratic presidential field — 10 candidates said they would consider adding seats to the panel in a video package with The New York Times, while 11 others said the Court’s composition should remain the same.

Justice Stephen Breyer, who like Ginsburg was appointed by former President Bill Clinton, was similarly dismissive of court-packing measures during an April interview in Washington. Breyer did not object, however, to term limits, provided a justice’s tenure is sufficiently long. Eighteen years is the going figure for term limit schemes.

The prospects of imposing term limits on the justices are slim. The Constitution provides that federal judges shall “hold their offices during good behavior,” meaning for life. As such, term limiting judges would require a constitutional amendment, a forbidding task. Ginsburg noted the Constitution “is powerfully hard to amend” in Wednesday’s NPR interview.

Public opinion is generally against court-expansion packages. A May survey found 51% of respondents opposed adding seats to the Supreme Court. Twenty-seven percent supported expanding the tribunal, while 22% had no opinion on the matter.

LifeNews Note: Kevin Daley writes for Daily Caller. Content created by The Daily Caller News Foundation is available without charge to any eligible news publisher that can provide a large audience.