Emissary of Satan: Megachurch Pastor Raphael Warnock says Abortion ‘Is Consistent with’ Christianity and ‘I Will Fight’ to Keep it Legal 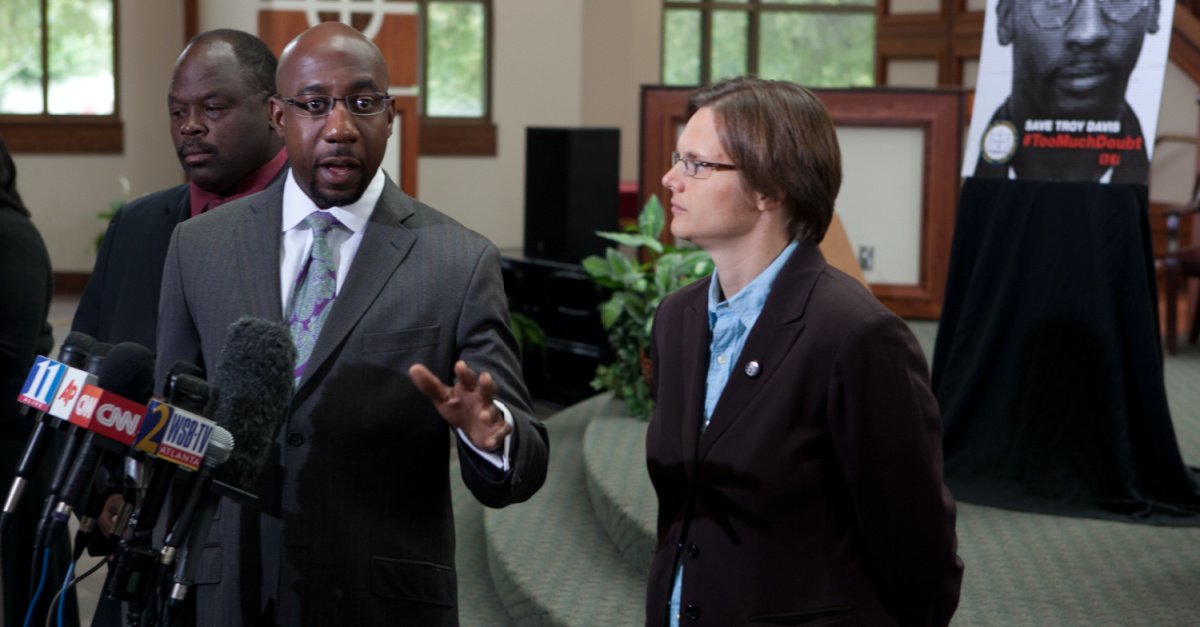 A pastor of a Georgia megachurch who also is running for U.S. Senate said last week he believes legalized abortion is “consistent with” Christianity and he would “fight” to ensure it remains legal.

Bryant asked Warnock how the pro-choice views of the Democrat Party “square with” his “role as a minister, a leader of a church, a man of God.”

“I believe that healthcare is a human right,” said Warnock, who has served as senior pastor of the church since 2005.

“And I believe that it is something that the richest nation in the world provides for its citizens, and for me, reproductive justice is consistent with my commitment to that.

“I believe unequivocally in a woman’s right to choose, and that the decision is something that we don’t want government engaged in – that’s between her and her doctor and her minister. And I will fight for that in the United States Senate, and at the same time continue to fight so women can receive the kind of services that they need in order to have a healthy pregnancy and healthy babies. We have a maternal death rate in this country that is exceedingly high, particularly to be the richest country in the world.”

Referencing his career as a minister and in public service, Warnock added, “I’ve been focused on women’s health, women’s choice, reproductive justice.

That is consistent with my view as a Christian minister. And I will fight for it.”

Bryant then asked, “Do you think it’s consistent with God’s view – that God endorses the millions of abortions we’ve had in this country since Roe v Wade?”

Warnock responded, “I think that human agency and freedom is consistent with my view as a minister.”

Planned Parenthood endorsed Warnock in May.

note: the original headline was edited by Unreal Post.

There is no way, absolutely no way anyone can support, promote, and fight for the right to kill unborn babies and be a minister for the Lord.

He is a no doubt a minister but Raphael Warnock senior pastor at Ebenezer Baptist Church in Atlanta is what the apostle Paul describes as a “minister of righteousness”… whose end will be according to their works (2 Corinthians 11:15).

I fully understand it’s no easy go-ahead to label a pastor as an emissary for Satan but in this case, it’s simple and done without consternation. Why? Because what he is saying and doing (actions) is in complete opposition to the Word of God.

There is no Scripture support for the murder of unborn babies. For any reason! But this silver-tongued pastor makes it sound like Scripture is in total support of murdering the unborn and that we as Christians should champion abortion. Hog-wash! What a bald-faced lie from the pit of hell and he knows it.

This is no doubt he is a false teacher doing what false teachers do best, deceive. And he is going all-in on deceiving the masses by not only deceiving his congregation but running for congress as a pro-abortion candidate to deceive even more people by suppressing the truth with his lie.

In 1 Timothy 6:3-10, the apostle Pauls warns the Church about false teachers and provides key characteristics to identify them in verse three.

‘If anyone teaches otherwise and does not consent to wholesome words, even the words of our Lord Jesus Christ, and to the doctrine which accords with godliness,’

‘he (false teachers) is proud, knowing nothing, but is obsessed with disputes and arguments over words (any words not just Scripture), from which come envy, strife, reviling, evil suspicions, useless wranglings of men of corrupt minds and destitute of the truth (and here it is, they have no truth and want nothing to do with Truth or Jesus Christ), who suppose (use the position of a Pastor) that godliness is a means of gain. From such withdraw yourself.’

Ultimately, Pastors/teachers are held to a much high standard and will be judged at a much higher standard. In this Pastor’s case it would’ve been better than he had not known the true saving power of the gospel because his punishment for misleading masses of people will be severe.

‘My brethren, let not many of you become teachers, knowing that we shall receive a stricter judgment. ‘

And In Your Book They all Were Written

God knew us before He made us. Life…

‘For You formed my inward parts; You covered me in my mother’s womb. I will praise You, for I am fearfully and wonderfully made; Marvelous are Your works, And that my soul knows very well. My frame was not hidden from You, When I was made in secret, And skillfully wrought in the lowest parts of the earth. Your eyes saw my substance, being yet unformed. And in Your book they all were written, The days fashioned for me, When as yet there were none of them.’