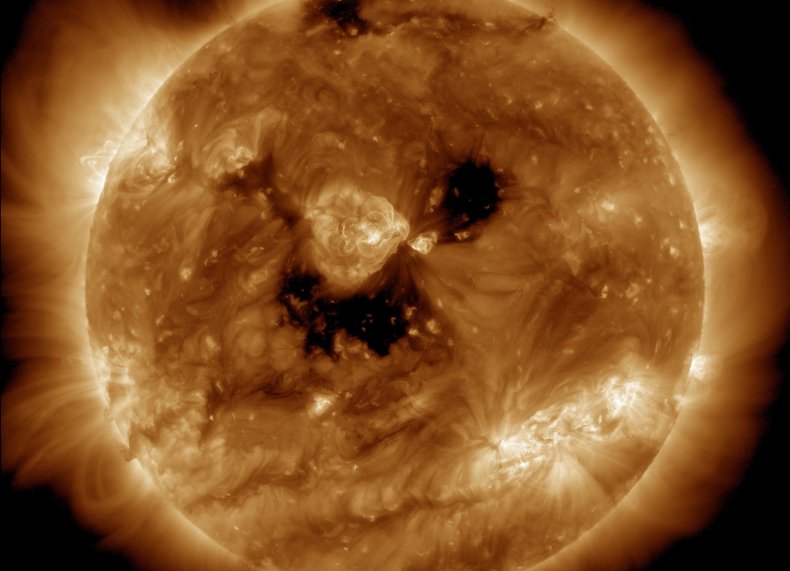 Earth is set to experience a double blow from the sun as it is by two solar eruptions: A stream of solar wind from a hole in the sun’s atmosphere; and a cloud of charged particles known as a coronal mass ejection.

A geomagnetic storm is the name given to the disruption of Earth’s magnetic field by solar activity. This disruption can have many effects on our planet and modern technology, including radio communication disruption and power grid issues. The SWPC said the storm could cause some high-frequency radio signal fading at high latitudes, increased drag on low-Earth orbit satellites, and auroras in some northern U.S. states like New York, Washington, and Wisconsin.

The coming storm will be partly due to a huge coronal hole in the sun’s atmosphere according to solar activity news website SpaceWeather.com.

A coronal hole is a region of the sun’s upper atmosphere that appears to be dark when viewed in X-ray and ultraviolet images because it is cooler and less dense than the surrounding solar plasma. These regions tend to have an open magnetic field structure, allowing solar wind—the continuous flow of charged particles from the sun—to escape out into the Solar System more easily and at high speed.

As this high-speed stream flows through space it compresses the ambient solar wind—that is, the flow of solar particles that constantly moves through the Solar System under normal circumstances. If the high-speed stream moves past Earth it can interfere with our planet’s magnetic field, typically causing effects that can last several days but are less severe in strength compared to other, more intense forms of solar eruptions like a coronal mass ejection (CME).

Click here to view the source of this article www.newsweek.com