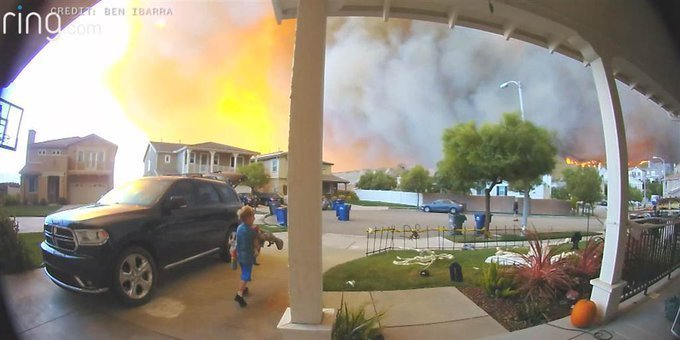 A video caught by Ring doorbell camera shows a California family evacuating their home as the Tick fire begins surrounded their neighborhood in Canyon Country, California totally destroying everything in its path, scorching nearby hills and filling the sky with smoke.

The bad news is a ‘Potentially Historic’ Wind Event Could Worsen California Wildfires This Weekend Wind Gusts Can Get As High As 80MPH.

Please pray for the people of California as many are being displaced from their homes and the fact that their very lives are in danger.

‘Bear one another’s burdens, and so fulfill the law of Christ. ‘

Also, pray for the brave men and women and the many fire departments involved in battling these massive fires.

California’s KTLA Channel Five reports A Canyon Country family managed to escape the fast-approaching flames of the Tick Fire on Thursday, but they lost their home, beloved animals and just about everything they had.​

A Canyon Country family managed to escape the fast-approaching flames of the Tick Fire on Thursday, but they lost their home, beloved animals and just about everything they had.​ https://t.co/trmWtH5PLJ

The numbers so far and only 5% contained.

California’s Governor has declared a State of Emergency due to wildfires. 🔥

Both are only 5% contained. Thousands are under mandatory evacuation.

← Prev: Couple Is Adopting a Baby after Their 'Don’t Abort. We Will Adopt!' Post Went Viral Next: Beth Moore Responds to John MacArthur: 'I Did Not Surrender to a Calling of Man' →