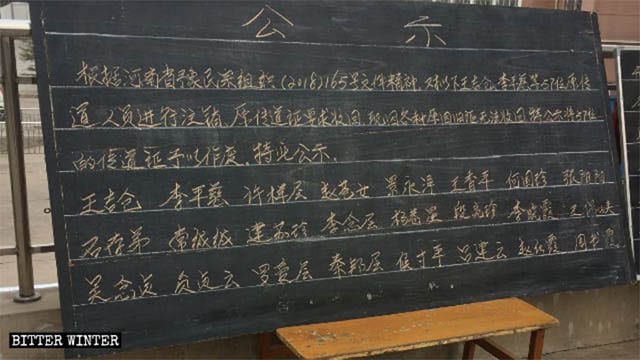 The preaching permits of 57 Three-Self Church preachers, all from the same district in Henan Province’s Sanmenxia City were revoked by the government, causing them to lose their preaching qualifications. The authorities have also manipulated the examinations each preacher should mandatorily undertake to oust “disobedient” preachers. Although the Three-Self Church is, by definition, allowed to operate by the government, under the New Regulation on Religious Affairs that came into force in 2018 its preachers are carefully watched and they can easily lose their position.

On January 10, 2019, an announcement jointly issued by the Shanzhou District’s Chinese Christian Council and the Three-Self Christian Church was published at Shanzhou District Central Church in Henan Province’s Sanmenxia City. It stated that the preaching permits of 57 preachers had been revoked, in accordance with the spirit of “Document No. 165,” emanated in 2018 by the Ethnic and Religious Affairs Committee of Henan Province. In fact, the reason for the revocation was not disclosed in the announcement.

How One Preacher Was Ousted

Based on the list of names in the announcement, I was able to get in contact with one of the preachers whose permit had been revoked. The female preacher explained the reason for the revocation of he permit. She said, “I passed the exam for a new preaching permit as requested by the New Regulation on Religious Affairs. However, the Religious Affairs Bureau refused to issue the new permit to me, claiming that I ‘do not listen’ to them. Now, they have revoked and canceled my permit entirely.”

After her preaching qualifications were revoked, she was no longer allowed to stand on the podium and preach. She added that even preachers who still have their certificate are subject to restrictions. Their sermons should please the CCP, or their certificates will be cancelled as well.

Several preachers at another church in Sanmenxia City also lost their preaching qualifications after failing the preaching qualification exam. In fact, they did not pass the exam because the CCP regarded them as “disobedient.” At the same time, one woman who was barely familiar with the Bible, but loyal to the CCP, “passed the exam” and obtained her preaching permit.

The local church director confirmed to Bitter Winter that the reason some preachers didn’t receive a new preaching permit after taking the exam is that they were accused of not having complied with requests from the CCP. For instance, some had refused to install a facial recognition device at the main entrance of the church, as requested by the government. These devices are intended to monitor the believers and ascertain who goes to church and when.

The church director also stated, “In the future, preachers who sincerely believe in God won’t be able to preach anymore. The authorities are preparing to install video and audio recording equipments on the church’s podium. This equipment will be connected to the Public Security Bureau’s computers. The preacher’s sermons will be regularly monitored and listened to. From now on, I’m afraid we’ll have no choice but to give sermons following the government’s instructions.”

In fact this is already happening. Good preachers have been stripped of their preaching permits and cannot stand on the podium anymore. The CCP’s ultimate goal is to use all kinds of methods to eradicate religious belief. Theoretically, the Three-Self churches are free to operate. But in fact, these churches that remain active are merely hollow shells controlled by the CCP.


Church Leaders Under Tight Control: Must Ask to Travel
Even personal travel to visit relatives requires permission, and detailed itiner…

CCP Demands Cultural Performances at Religious Sites (VIDEO)
In its effort to blot out religion, the Chinese Communist Party uses churches an…

← Prev: Early Rain Church members remain in detention Next: Sleeping in the Forrest: 100+ Believers Desperately Try to Escape the Police →