Crackdown on “Halalization” Spreads Outside Xinjiang 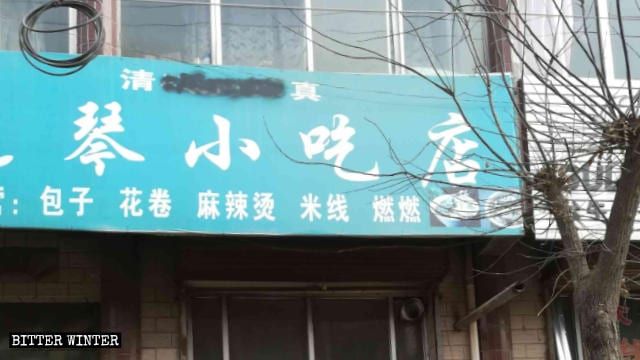 The Communist Party authorities are “de-extremizing” China by focusing on removing Islam-related symbols.

A mass purge of Arabic symbols is underway in China, part of the government’s efforts to crack down on the “spread of halal” – in other words, anything that would appeal to the Muslim community.

Muslim law requires that food and drink be prepared in a certain way that’s acceptable for adherents to consume. In its bid to remain “secular,” the Chinese Communist Party has introduced the concept of qingzheng fanhua, which is loosely translated as the “spread of halal,” that forbids any display of Islamic identity.

Bitter Winter has reported on how the authorities in Xinjiang have been destroying businesses because of the policy. Products that are certified as “halal” or resemble Islamic motifs even remotely are consistently thrown out of shelves, and the business owners are often fined for keeping these products.

The campaign of removing Islamic symbols and prohibiting products labeled as halal has also reached other areas of China that have large Muslim populations, like Xinjiang’s neighboring province of Gansu.

In October 2018, a massive removal of symbols took place in Mengcun Hui autonomous county, under the jurisdiction of Cangzhou city in northern Hebei Province. Most of the Arabic symbols at shops along the streets were removed – from all restaurants, grocery stores, and other shops.

According to witnesses, one day in mid-October, four or five uniformed police officers arrived at the entrance to a supermarket and threateningly questioned the supermarket’s ethnic Hui owner, asking: “Are you going to remove the Islamic symbols yourselves, or should we use the excavator to remove them for you? If we demolish the symbols, by the time we’re done excavating, everything inside will be destroyed, and the building will collapse.”

The terrified owner removed the religious symbols by himself.

Again, in October, officials from the Religious Affairs Bureau of Cangzhou city arrived at a school cafeteria to conduct an inspection and demanded that the word “halal” written in Arabic inside the school cafeteria be removed.

Officials claimed the order was a straight directive from the central government, saying that any Arabic symbols containing the word “halal” be removed from every city and province within two months. The cafeteria owner was also warned that officials might come to make a secret visit at any time and will take photos as part of their inspection.

“If it doesn’t have the halal symbol, we can’t tell if it’s a halal food item or not, and we wouldn’t dare to eat it,” one Hui resident said.

One food distributor in Hebei’s Tangshan city told Bitter Winter that the halal symbol has been removed from the packaging of a product called “Chang’s Palm Golden Crispy Noodles,” which they buy from a factory in central Henan Province’s Jiaozuo city, therefore requiring many Hui people to call in to verify whether they are selling counterfeit goods; if it’s not marked halal, Muslims can’t eat it.

In September 2018, more than 80 shops in Chengguan district of Gansu Province’s capital, Lanzhou city, were ordered to alter their storefront signs.

According to a supermarket worker in Zhongning county, under the jurisdiction of Zhongwei city in Ningxia Hui Autonomous Region, officials from the Food and Drug Administration could come at any time to inspect whether any of their food products contain the word “halal” and, if any are found, a fine will be imposed.

A food company employee in Yinchuan city in Ningxia told Bitter Winter that last year, the government demanded that every major food company in the city change the packaging of the food products they had sold to the sellers. The food products must not contain any halal or Arabic symbols from then on.

“We spent over one month just handling all the products that were returned from various supermarkets and replacing their packaging,” the employee said.

A supplier in Ningxia’s Shizuishan city also said that because there was a large inventory of products packaged in boxes containing Arabic symbols, they couldn’t be processed all at once. To reduce losses, some manufacturers sold their products for up to 40 percent off. Some stores were even forced to stop selling products, which resulted in heavy losses – in profits for both the stores and the employees.


Authorities Sinicize Mosques Across China
Thanks to the policy to make religions “more Chinese,” Islamic symbols have been…

Muslims Arrested, Families Sent Back to Xinjiang
CREDITS: neverdance – CC BY-SA 3.0
Muslims from Xinjiang who work in other pro…