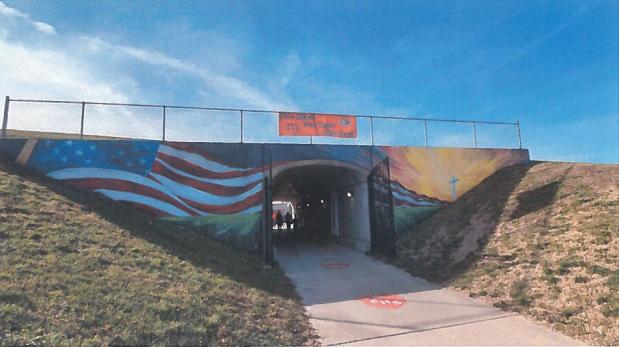 A depiction of the “Cross at the Crossroads” that was included in a mural on a headwall on city-owned property in Effingham, Illinois has now been painted over.

The erasure comes months after receipt of a letter from the Wisconsin-based Freedom From Religion Foundation (FFRF), which claimed that the inclusion was unconstitutional. “While each City official might find the mural to be an attractive and accurate representation of the city, the council wants to emphasize that the City of Effingham is an inclusive and welcoming City where broad and diverse viewpoints are accepted and respected,” the City said in a statement. “The last thing the city council wants is for any members of our community to feel excluded or treated as second-class citizens because they hold a minority belief. It is in service to these principles that the City Council has altered the mural accordingly.” As previously reported, in December, FFRF wrote to Mayor Mike Schutzbach to advise that a local resident had alerted them to the inclusion of a cross in a mural painted under an overpass between Effingham High School and its sports complex and to request that the Christian symbol be removed from the artwork. “It is inappropriate and unconstitutional for a government-owned mural to prominently feature a religious display, such as a Latin cross,” the letter read. “It is especially inappropriate where the display is placed in a location where it will predominantly be viewed by public school children and staff moving from one part of their campus to another.” The self-described Church-State separation group asserted that the cross, being on government property, violates the Establishment Clause of the U.S. Constitution and makes non-Christians feel like “political outsiders.” “A mural that depicts nothing except a Latin […]

The righting is on the wall… after the ‘cross’ was painted over. Christians in America will soon face unprecedented persecution. There is no stopping this irrational hatred for Christ and His Church. It’s coming sure and fast.

‘But know this, that in the last days perilous times will come: ‘

The great Apostasy is here and now.

‘Now as He sat on the Mount of Olives, the disciples came to Him privately, saying, “Tell us, when will these things be? And what will be the sign of Your coming, and of the end of the age?” And Jesus answered and said to them: “Take heed that no one deceives you. For many will come in My name, saying, ‘I am the Christ,’ and will deceive many. ‘